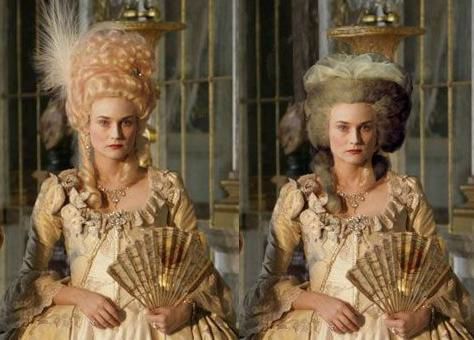 An interesting post to share! A brief look (French text) on Le costume historique about the inaccuracy of the costumes and fashion of Benoit Jacquot's Les adieux à la reine/Farewell My Queen.

The costumes in the film were beautiful to look at, but certain aspects--such as the wig Diane Kruger can be seen wearing in the image on the left--looked like they belonged in a lower budget TV drama. With so much attention put on trying to recreate the atmosphere of Versailles, trying to "resurrect the ghost" of its final days... why overlook such an important part of its life?