About Those Famous Converse... 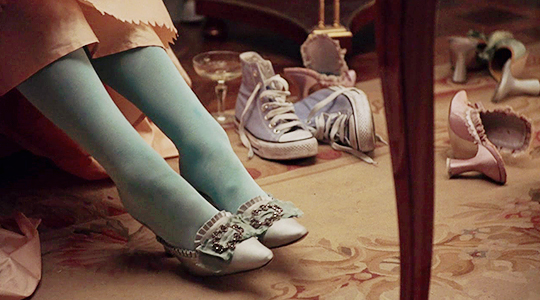 If there is one element about Sofia Coppola's Marie Antoinette that sparks endless debate and confusion--not to mention plenty of hubbub on social media!-- it's the brief shot during the "I Want Candy" shopping sequence which reveals a pair of pastel blue Converse lurking in the background.

Why are there Converse in the film? Were they put there on purpose? Were they an unfortunate oversight on part of the prop master? The answer lies in a 2006 IGN interview with director Sofia Coppola. In this interview, Coppola talks about the involvement of her brother, Roman Coppola, on the film. Roman shot some of the secondary footage for the movie, including the now famous "I Want Candy" sequence.


IGN: Why did Roman include a pair of Converse tennis shoes in the "I Want Candy" sequence?

Coppola: Why was that? Yeah, he shot the whole "I Want Candy" montage and he just saw that there and put it in for me for fun. He just shot a bunch of stuff and left that in for fun because he thought I would like it, and then when I was editing we decided to leave it in.

It was Roman Coppola, not director Sofia Coppola, who made the deliberate decision to include the Converse for fun while shooting secondary footage. This footage would later be chopped up, pared down and edited into the final shopping montage sequence. While editing all of this secondary footage, they decided they wanted to include the shot with the Converse in the final film.

And there we have it: the inclusion of the Converse was a deliberate decision, sparked by Roman Coppola having a bit of fun with the secondary footage he created for the film.

Although the shoes were a fun inclusion on the part of her brother which eventually turned into a permanent choice, rather than a meticulously pre-planned detail on part of director Sofia Coppola, this doesn't mean that they can't be considered during an analysis of the film. It's very easy to see how the Converse are viewed as a way to emphasize Marie Antoinette's youth through Coppola's broader intention; that is, helping modern youth in the audience feel more connected to the historical figure of Marie Antoinette.

After all: what could be more youthful and fun than shopping for new shoes--whether they're pastel blue mules or Converse sneakers?
Posted by Anna Gibson at 10:18:00 PM