The wedding dress worn by the 14-year old Marie Antoinette for the lavish ceremony held in the Royal Chapel of Versailles must have been a spectacle to behold. The court of France was the epicenter of fashionable dress in Europe, where trends were made and unmade, and where court dress was well-known for being the most luxurious of all. 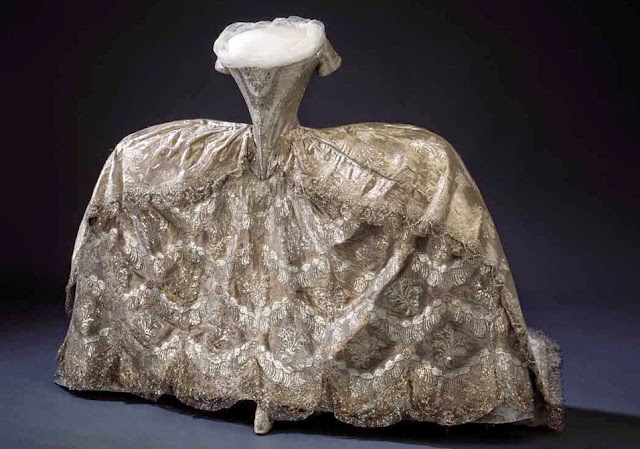 The wedding dress of Hedwig Elisabeth Charlotte of Holstein Gottorp is among the finest surviving examples of a wedding dress worn by someone in the very upper crust of European society. Hedwig married the future Charles XIII of Sweden in June of 1774, just four years after the wedding of Marie Antoinette; Hediwg's dress, made with expensive silver cloth and tissue, was ordered from Paris and would have been the height of court-approved royal wedding apparel at the time. The dress originally had matching sleeves made from silver tissue and lace, but these were later removed. 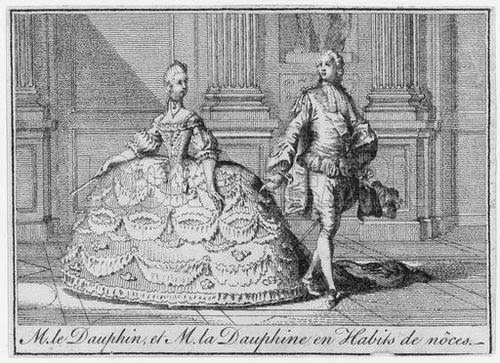 image: Marie Antoinette and Louis Auguste in their wedding outfits

This particular contemporary engraving of Marie Antoinette and her new husband Louis Auguste in their wedding ensembles matches the descriptions of their wedding day dress quite well. No expense would have been spared for either outfit--the wedding of the heirs to the throne of France was no "simple" wedding! Marie Antoinette's dress was made from beautiful silver cloth, bedecked in diamonds and other jewels that sparkled as she passed the throngs of spectators gathered to witness the important ceremony; while Louis' ensemble, though it was described as not fitting the groom--who blushed and trembled--exceptionally well, would have been made from brilliant gold cloth. 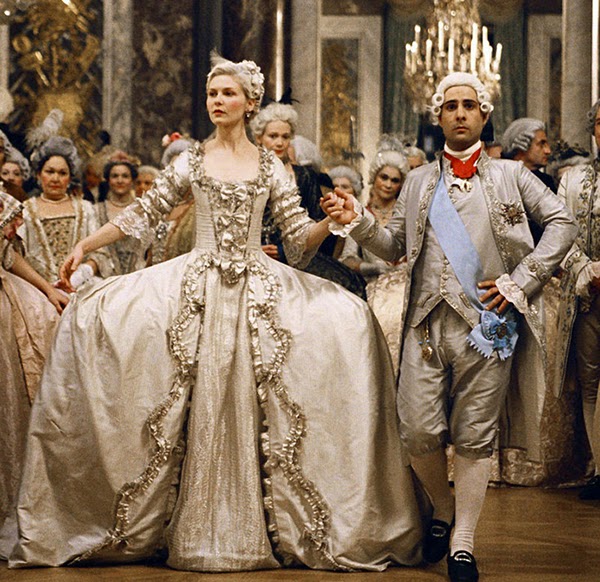 Marie Antoinette's wedding dress has been featured in multiple films about the queen. The dress worn in the 2006 Sofia Coppola film was designed by Milena Canonero. The dress is made from a beautiful silver cloth with a creamy tint and decorated with various ribbons and embellishments, although Marie Antoinette is not "much jeweled" as she was described on her real wedding day. Many of the dresses featured in the film do not have as many ornamental embellishments as court dress at the time, which may have been a way of giving the costumes more appeal to modern viewers. 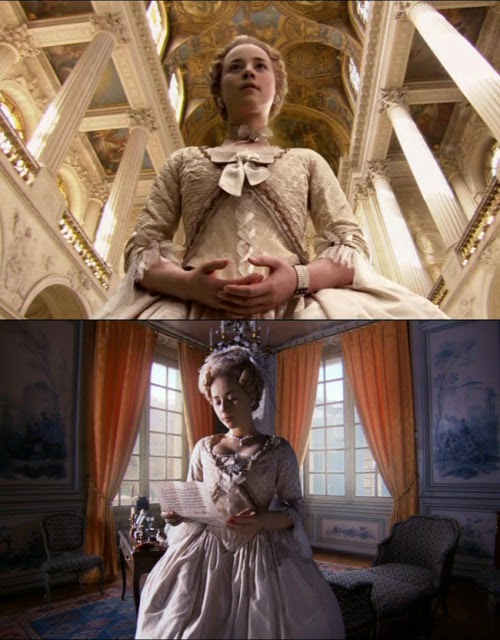 This dress was worn by Karine Vanasse in the docudrama Marie Antoinette: La veritable histoire. The gown was actually used twice in the film: first in the wedding scene and again during a scene where Marie Antoinette is reading a letter from her mother. The dress is relatively simple in comparison to the type of dress Marie Antoinette may have worn; the simple design may have been intentional so that the filmmakers could re-use it in another scene without requiring the creation of an entirely new ensemble. The costume designers for the film are listed as Pierre Bechir, Nicoletta Massone, Sylvie de Segonzac. 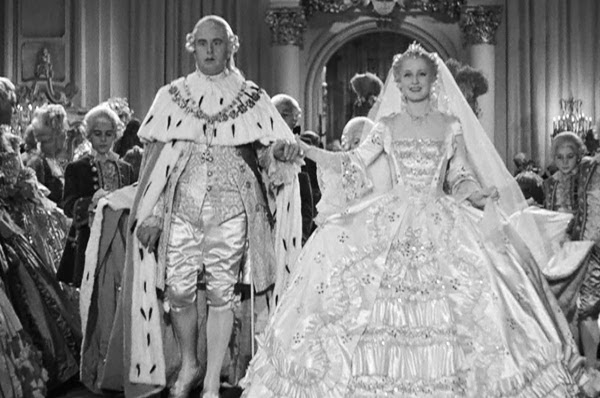 The wedding won designed by Gilbert Adrian for Marie Antoinette (1938) is easily among the most sumptuous and detailed gown in the film--and perhaps one of of the most sumptuous gowns in film history! The gown, which weighed an amazing 108 lbs, was made with 500 yards of pristine white satin; it was hand-embroideredwith thousands of seed pearls, ribbons and other delicate (and expensive!) embellishments. With the amount of work and money it must have taken to create this dress, it's no wonder the MGM studio heads were breathing down Adrian's neck about the costume budget!