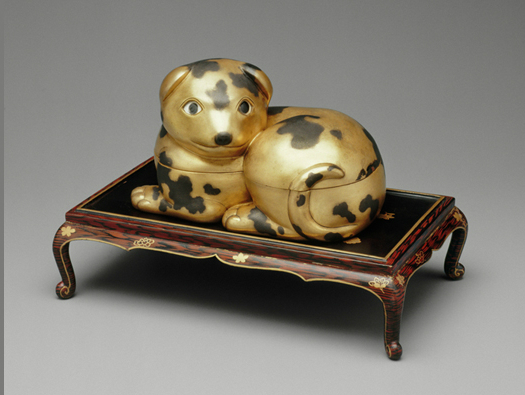 As for Marie Antoinette, she was so enamored of her little boxes that she redecorated the cabinet doré (or private sitting room) to showcase her collection. This dog-shaped box was not stored in the immense glass cabinet she commissioned to store her pieces, but was highlighted with other favorite objects on smaller tables placed throughout the room. It would have certainly been a conversation starter: a small lacquer box intended for the Japanese upper class that traveled the world to send up in the private apartment of the queen of France.

After the events of October 1789, Marie Antoinette asked Martin Éloy Lignereux, an art dealer whom she trusted, to return to Versailles and pack some of her personal belongings. Among these were her collection of lacquer boxes, which were sent to Paris with the intention of eventually making their way to the queen at the Tuileries. This was never to be, and the queen was never reunited with her treasured boxes. The collection remained with the art dealer until 1794, when he was ordered to surrender them to the new government. Surprisingly, the pieces were not destined for the same fate--destruction or sale--as most of Marie Antoinette's personal belongings. Instead, they were sent to the newly minted Muséum central des Arts, where they remained until just after WWII. In 1965, many of the pieces--including this charming dog box--were returned to the chateau de Versailles collection, which still owns them today.