Women's History Month: A self-portrait by Anne Mee, circa 1795 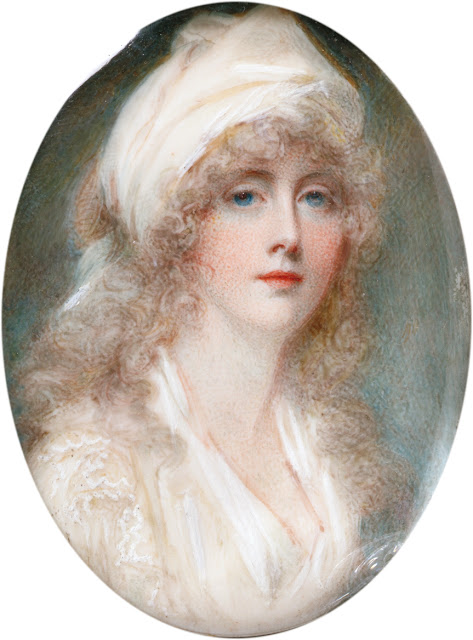 Self-portrait by Anne Mee, circa 1795. Victoria and Albert Museum.

Anne Mee, born Anne Foldsone, was--like a number of women artists of her day--the daughter of a painter. John Foldsone was known for painting miniature portraits, which were received with mild praise; he was described in Edward Edwards' notable Anecdotes of Painters as painting works which had "no great merit, but with sufficient likeness to procedure much employment at a small price." Foldsone's portraits were fast and simple: he would arrive in the morning to start a sitting and finish his miniature portrait before leaving in the evening.

Anne began painting as early as 12 years old, and when her father died in 1787, she took on the responsibility of supporting her 7 siblings and mother. Although Anne's portraits were never lavishly praised, she managed to secure a number of high-profile aristocratic and royal patrons, likely due to her association with George Romney, who paid her tuition.

However, the same swiftness which defined John Foldsone's portrait commissions could not be applied to Anne. She was somewhat notorious for her slowness in completing portraits, and she even earned the ire of Horace Walpole, who in a string of letters complaining about the continually undelivered portraits her ordered, wrote: "Miss Foldsone is a prodigy of dishonest impertinence."

Despite this, Anne remained a popular portraitist well into the 1800s. In 1812, she published a short-lived series based on the "beauties of the court of George III," which ran for one volume. She continued to exhibit her work until at least 1837; not much is known about her later years, except that the will she created before her death in 1851 left everything to her eldest son, the architect Arthur Patrick.
Posted by Anna Gibson at 12:35:00 PM