4 Biographies You May Have Missed About (Non-Royal) 18th-Century Women
For the reader looking for interesting biographies on historical woman, there is--thankfully--hardly a shortage of books to choose from. But for readers looking to discover more about the lives of 18th century women, it can sometimes be hard to find biographies that aren't about those in the upper reaches of society. I've compiled a list of 4 biographies about 18th-century women who may not have been born queens or duchesses, but whose fascinating and even tragic lives remain a worthwhile subject of study today. 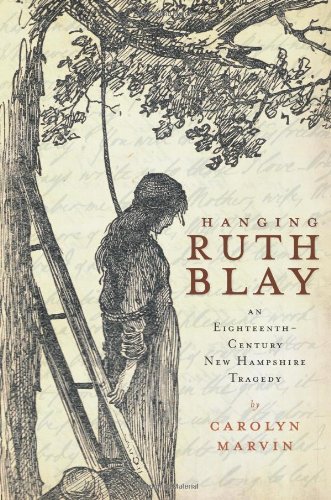 On December 30th, 1768, Ruth Blay--a former schoolteacher, aged 31--was hanged to death for the crime of concealing the death of her stillborn illegitimate child. Her trial and executed proved controversial among locals, and though her death has been the source of local lore since her fateful hanging, Marvin's book is the first extensive look at uncovering and understanding the real life and tragic fate of the last woman ever executed by the estate of New Hampshire. The Diary of Elizabeth Drinker: The Life Cycle of an Eighteenth-Century Woman edited by Elaine Forman Crane

Elizabeth Drinker, a Quaker woman, began her diary in 1758, in the earliest years of her courtship with her soon-to-be husband, and kept regular entries until her death in 1807, in a world that would have been hardly recognizable to the young Elizabeth living in colonial America. In her extensive diary--presented here by Elaine Crane in an abridged edition--Elizabeth Drinker kept a personal record of her thoughts on her duties as a Quaker woman, as a mother, as a woman in a period when engaging and discussing politics entered into the female sphere; and on a host of social and political changes, including the American revolution, the French Revolution, and a changing landscape that altered society in significant and subtle ways The Many Captivities of Esther Wheelwright by Ann M. Little

Esther Wheelwright began her life as the fourth of eleven children born to strict Puritan parents who operated a well-known garrison in the southern part of Maine; she was only 7 years old when she was captured by group of Wabanaki who attacked the area as part of a coordinated French assault; and in the next few years, she found herself enrolled in an Ursuline boarding school where she became convinced that she had been called to become a nun. By the time of her death in Quebec City in 1780, Esther had transformed into an educated, diplomatic Mother Superior well known for her political and financial savvy. Little's biography of Esther Wheelwright is an in-depth look at a relatively little-known yet fascinating woman. The Ordeal of Elizabeth Marsh: A Woman in World History by Linda Colley

Elizabeth Marsh was a remarkable woman who left behind almost none of the typical traces of her life that biographers hunt for when retelling the lives of past men and women. No portrait, no diaries, no existing letters--though she wrote them constantly; instead, Marsh left behind a vast amount of connections that place her on multiple continents and in some of the most unusual places in the world for a woman in her time. In telling the story of Elizabeth Marsh, Linda Colley tackles more than a reconstruction of one person's life; it is an exploration of the development of the connected world, and how connections--old and new--shaped and changed lives forever.
Posted by Anna Gibson at 4:24:00 PM