Portrait Wednesday: a day for sharing portraits of Marie Antoinette and her contemporaries. 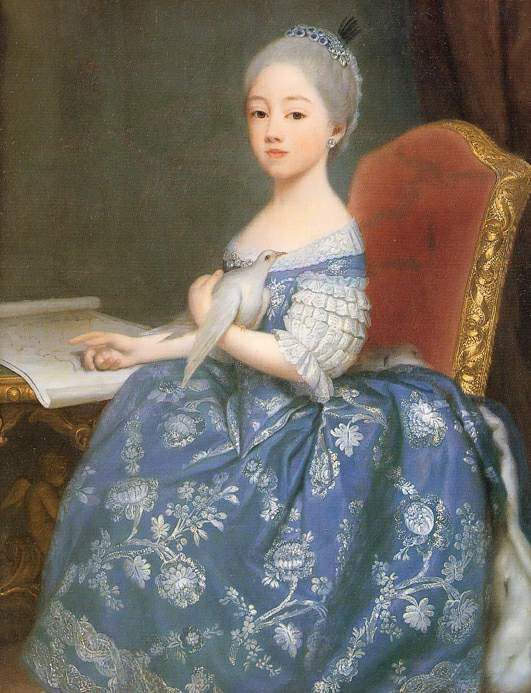 You may already recognize this portrait of a young Marie Joséphine of Savoy (future comtesse de Provence) by Giuseppe Duprà: it is a companion piece to a similar portrait depicting her sister, Maria Theresa of Savoy, by the same artist. It is likely that the two portraits were commissioned around the same time, as they are cohesive in everything from dress to composition.

As it was mentioned in a previous Portrait Wednesday, Duprà was popular among royal patrons, and his seven portraits of Savoyard princesses can still be seen in the Palazzina di caccia of Stupinigi today.

Like the portrait of her sister, a closer look at this portrait reveals interesting details that denote the young Marie Joséphine's place in society, along with a few details that hint at greater accomplishments than her family name. Her gown is made with a remarkable blue fabric with white or silver embroidery, and features the same delicate lace sleeves and flounces as her sister's gown. Hints of expensive ermine can be seen in the cloak draped behind her, indicating her wealth and social status. Her hair is styled and lifted slightly, with flower and diamond accents that match her diamond earrings.

Of particular note here is how Marie Joséphine was posed, particularly in comparison to the portrait of Maria Theresa. While Maria Theresa was posed with a simple flower in her hand and an ornate flower vase on the table, Marie Joséphine is posed in a more mature way: she is holding a white dove (or pigeon) to her chest and resting her hand on drawing. Doves could be used in portraiture to denote innocence and purity, as well as religious devotion. The inclusion of a drawing symbolizes her personal accomplishments, as befitting her slightly higher age when compared to her sister Maria Theresa. Incidentally, there is another portrait online--this one after Dupra--which depicts Marie Joséphine showcasing one of her personal drawings. In this portrait, Maria Theresa is not simply a Savoy princess, but a growing young lady with accomplishments of her own.
Posted by Anna Gibson at 2:38:00 PM