October Offerings: An illustration from 'The Castle of Otranto' 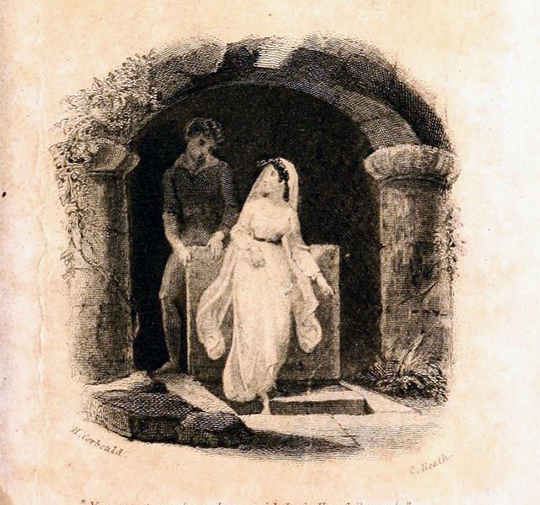 [image: “We must go down here,” said Isabella.  “Follow me; dark and dismal as it is, we cannot miss our way; it leads directly to the church of St. Nicholas." An illustration from The Castle of Otranto : the old English baron, 1800 double-edition.]

Words cannot paint the horror of the Princess’s situation.  Alone in so dismal a place, her mind imprinted with all the terrible events of the day, hopeless of escaping, expecting every moment the arrival of Manfred, and far from tranquil on knowing she was within reach of somebody, she knew not whom, who for some cause seemed concealed thereabouts; all these thoughts crowded on her distracted mind, and she was ready to sink under her apprehensions.  She addressed herself to every saint in heaven, and inwardly implored their assistance.  For a considerable time she remained in an agony of despair.

At last, as softly as was possible, she felt for the door, and having found it, entered trembling into the vault from whence she had heard the sigh and steps.  It gave her a kind of momentary joy to perceive an imperfect ray of clouded moonshine gleam from the roof of the vault, which seemed to be fallen in ... She advanced eagerly towards this chasm, when she discerned a human form standing close against the wall.

She shrieked, believing it the ghost of her betrothed Conrad.  The figure, advancing, said, in a submissive voice—

“Be not alarmed, Lady; I will not injure you.”

So reads a passage from the 1764 novel The Castle of Otranto, written by Horace Walpole. It is widely considered by literary critics to be the first truly "Gothic novel," and its thematic elements helped form the foundation for what would become common tropes in Gothic fiction. The popularity of The Castle of Otranto inspired many other writers to take up their pen, ultmiately resulting in one of the most popular literary genres of the late 18th and early 19th century.

In 1778, author Clara Reeve published her own version of Otranto called 'The Old English Baron.' In her introduction, Reeve notes her novel's origins:


"This Story is the literary offspring of The Castle of Otranto, written upon the same plan, with a design to unite the most attractive and interesting circumstances of the ancient Romance and modern Novel, at the same time it assumes a character and manner of its own, that differs from both; it is distinguished by the appellation of a Gothic Story, being a picture of Gothic times and manners."

But in contrast to the original Otranto, Reeve's version is remarkably grounded. She created, as critics would later note, a "probable ghost story" where almost every supernatural element could have another explanation. The reasoning behind Reeve's tamer tale can be found in her Preface, where she explains that Gothic tales should keep themselves "within certain limits of credibility." She continued, specifically bringing up some of the more outlandish elements of the original Otranto, that:


"A sword so large as to require one hundred men to lift it; a helmet that by its own weight forces a passage through a courtyard, into an arched vault, big enough for a man to go through; a picture that walks out of its frame; a skeleton ghost in a monk's cowl--when your expectation is wound up to the highest pitch, those circumstances take it down with a witness, destroy the work of imagination, and instead of attention, excite laughter."


Walpole, for his part,  found her story probable--too probable. He was quoted as saying in response to her novel: "The Old English Baron is so probable that any trial for murder at the Old Bailey would make it more interesting story.'"

Ironically, despite their mutual criticisms, the novels were occasionally published in tandem. The above illustration is from a 1800 edition which includes both the original The Castle of Otranto and Clara Reeves The Old English Baron.