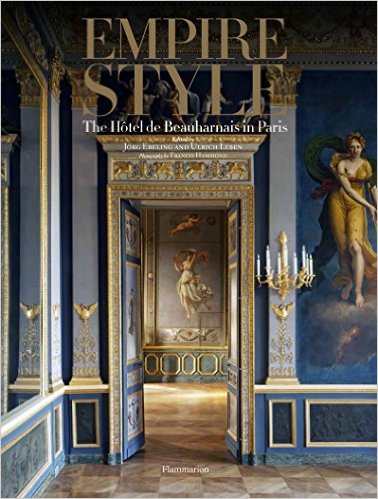 Empire Style: The Hôtel de Beauharnais in Paris by Jörg Ebeling and Ulrich Leben, featuring photography by Francis Hammond, is one of the newest historical offerings from Flammarion to focus on the history and style of a historical French estate.

The Hôtel de Beauharnais was constructed between 1713-1715, but it was given new life in 1803 when Josephine Bonaparte purchased the property for her son. The extensive renovations she ordered in order to bring the home up to Empirical tastes, and the subsequent restoration projects which sought to restore the building to its iconic Empire style in later years, are what make the Hôtel de Beauharnais one of the most stunning examples of Empire-era architecture still in existence today.

The book is split into two broad sections. The first 175 pages are an exploration of the building's history from 1713 through the 21st century. An early preface discuses the most recent conservation efforts on the building, which were conducted with extensive cooperation between French and German organizations. The renovation and redecoration ordered by Josephine Bonaparte are given special focus, with three chapters dedicated solely to the various decorative aspects (such as furniture, fabrics, and paintings) that transformed the Hôtel in the early 19th century. The chapter "The Empire Style: Ideals, Methods, and Objectives," is a particularly interesting look at the creation of standards for Empire style as well as the contemporary hope for its longevity. 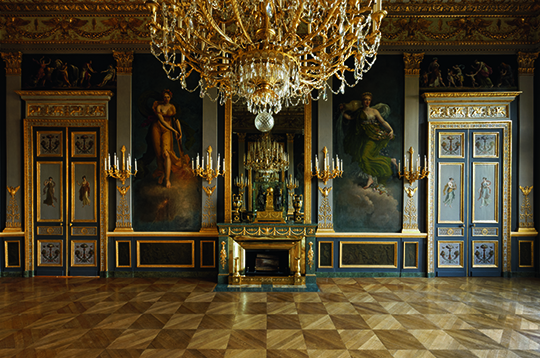 View of the Four Seasons Drawing Room, with fireplace flanked by depictions of Spring and Summer. © Francis Hammond, from Empire Style: The Hôtel de Beauharnais in Paris (Flammarion, 2016).

Also extensively discussed in this first section is the transformation of the Hôtel de Beauharnais into a residence for the Prussian--and then German--ambassador in Paris and how that new status impacted the building through the years. The intertwining of politics into the history of the Hôtel make for a compelling read about the often overlooked constraints of preserving certain historical buildings, which are not museum pieces stuck in one single time period, but active residences with a history that goes beyond their initial construction. One significant example of this is the ceiling of the Four Seasons Drawing Room. This room was renovated in 1840 after the king of Prussia acquired the building, and the original Napoleonic raptors were replaced with Prussian eagles, signifying a new chapter in the building's history; these eagles remain today, just one of the reminders of the Hôtel's ongoing history.

The somewhat debated restorations carried out in the 1960s will be of particular interest to readers with a passion for historical preservation. To quote Karl Hammer, whose thoughts on the 1964-1968 restorations concluded that "In restoring the interior design, the goal was to reconstruct what was considered to be its authentic Empire phase, but using as the model the image of the site as it has been found. It appears that no thorough art-historical research preceded the attempted restoration." View from the Vestibule into the Library, restored to its original colors in 2010. © Francis Hammond, from Empire Style: The Hôtel de Beauharnais in Paris (Flammarion, 2016).

The second section of the book is a tour of the historic rooms of the Hôtel de Beauharnais as they appear today; this section is divided into chapters for each room. The chapter for each room contains a look into the basic style and architecture of the room, along with detailed information regarding what is known of the room's original state, renovation during the Empire, evolution throughout the 19th and 20th centuries, and finally the current state of the room. The engaging text in each of these room chapters is supplemented with high quality photographs, drawings, paintings, and other illustrations.

I found the text highly informative and I was pleasantly surprised by the additional information regarding the restorations in each specific room, which added to the details already provided in the first section of the book. 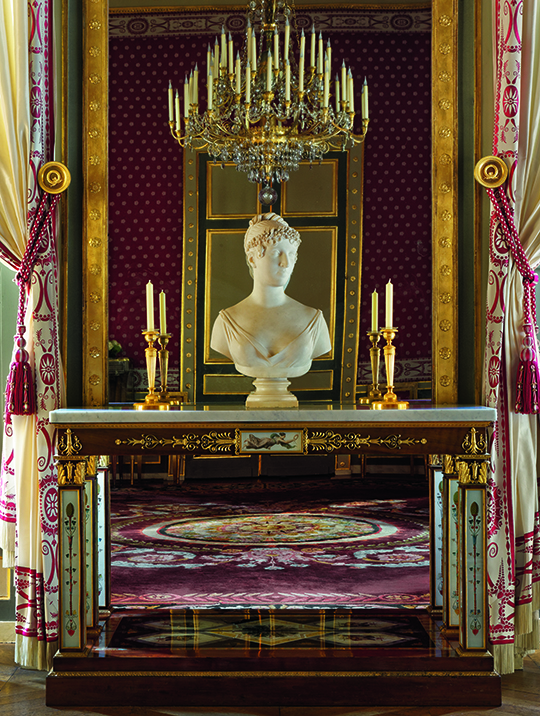 The sides of the pier table in the Cherry Red Drawing Room are adorned with reverse-glass paintings on silk , echoing the colors in Belloni’s mosaic-work on the fireplace. Furniture decorated with glass paintings during the Empire period is very rare. © Francis Hammond, from Empire Style: The Hôtel de Beauharnais in Paris (Flammarion, 2016)
.


The photographs, paintings, illustrations and other artwork featured throughout the book are reproduced in excellent quality. The new photographs by Francis Hammond are a joy to look at and allow a detailed, personal view of many of the Hôtel's grandest rooms. Other photographs include historical photos taken during the Hôtel's long history, both of former residents and the building itself; one memorable photo shows the shocking condition of the Music Room in 1965, just one of the rooms in "alarming condition" by that time!

The book itself is a large coffee-table size, which is ideal for catching the many details in the drawings, paintings, and stellar photography featuring throughout the book. The extensive text provides an interesting insight into the history of the building, its multiple renovations and subsequent restorations, as well as context for the building's status as a residence for Prussian and then German ambassadors.

I highly recommend Empire Style for anyone with an interest in French history, the French Empire, historical French buildings and French architecture, as well as the history of French-German relations. It is well-written, supplemented with excellent photographs and artwork, and provides a detailed look into one of France's architectural jewels.