October Offerings: The Three Witches from Macbeth by Daniel Gardner

It's the time of year again! I am a big fan of the October season and this year I will be adding a touch of Halloween to my regular posts with some 'October Offerings,' or posts that are a bit more Halloween-y than my usual fare.

First up is a look at an unusual portrait by Daniel Gardner! 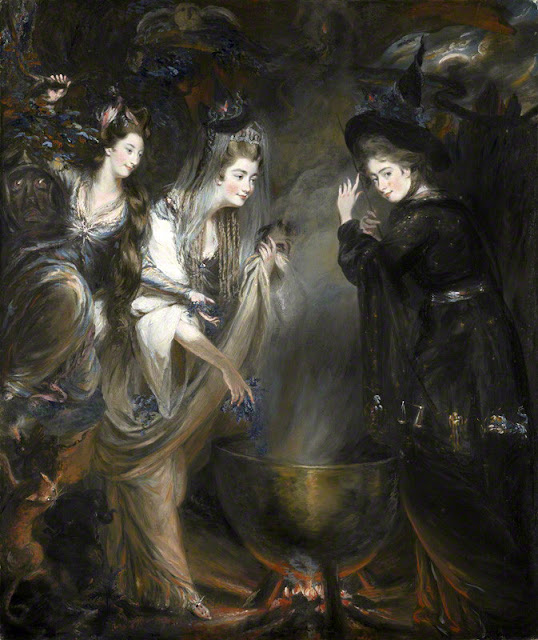 The Three Witches from Macbeth by Daniel Gardner, 1775 [in the collection of the National Portrait Gallery]

It was not unusual for the European elite to have themselves painted as characters and figures--mythological portraits were especially popular in the 17th and 18th centuries, as the countless portraits of aristocratic women as Diana clearly show! But this triple portrait by Daniel Gardner is rather unique: rather than portrait his subjects as goddesses or nymphs, they are portrayed as the three witches from Shakespeare's Macbeth.

The women in the portrait were considered the creme de la creme of their contemporaries: Elizabeth Lamb, Anne Damer, and Georgina Cavendish--best known as the duchess of Devonshire. All three women enjoyed prominent positions in British society and had, at the time of this portrait sitting, become close friends who shared similar artistic temperaments and a passion for Whig politics. This portrait is believed to have been Elizabeth Lamb's way of publicizing her new intimate friendship with the duchess of Devonshire.

Lady Mary Coke wrote about the portrait in her journal: "... all [three women] being drawn in one picture in the Characters of the three Witches in Macbeth ... They have chosen that Scene where they compose their Cauldron, but instead of "finger of Birth-strangled babe, etc" their Cauldron is composed of roses and carnations and I daresay they think their charmes more irresistible than all the magick of the Witches."

It does seem likely that, as the National Portrait Gallery discussion suggests, the theme of the three witches brewing in their cauldron was meant to allude to the fact that all three women 'brewed' schemes for the political allies in their circle. No one knows who chose the theme, but since Gardner did not ordinary paint anything other than "normal" portraits, it's probable that one of the three women came up with the conceit. Whoever decided on the unusual theme, I can't help but find the portrait irresistibly charming and mischievous--and just a bit cheeky.
Posted by Anna Gibson at 12:48:00 AM