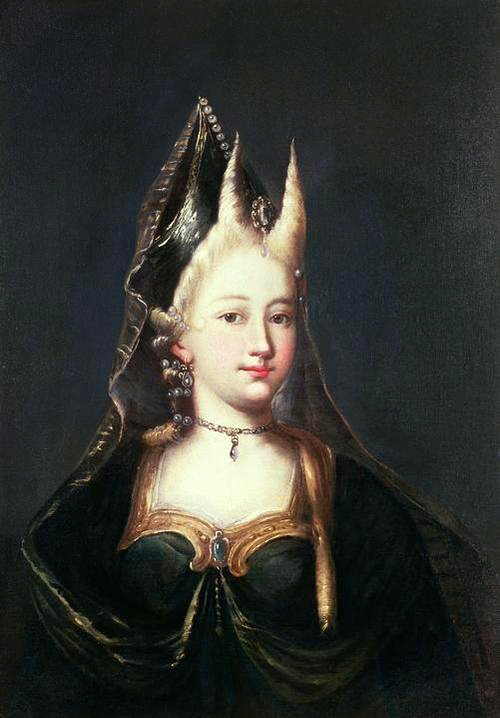 Which Witch is Which?

For this year's spookified October posts, I wanted to focus mostly on paintings and portraits that brought to mind the Halloween spirit. I'll admit that I can't remember how I stumbled on this particular portrait, but the first time I found it online, it was described merely as "A horned witch, 18th century." An apt description, to be sure--but an unusual one, since paintings featuring witches from this time period (with a few exceptions, like the lovely triple portrait from last week) tend to be 1) haggard and old and 2) scene paintings rather than standard portraits. So a portrait of a beautiful witch painted in an ordinary style is strange, to say the least.

Using my very best research skills (AKA Google's Reverse Image Search) I quickly discovered that the portrait has several other identifications, the most persistent (and unlikely) of which is that of Katharina Kepler, mother of scientist Johannes Kepler and accused witch.

It's not hard to see why the identification of an alleged witch would stick: a lovely woman with horned hair and dramatic black clothing makes the perfect companion to any article or a online blip about an accused witch. 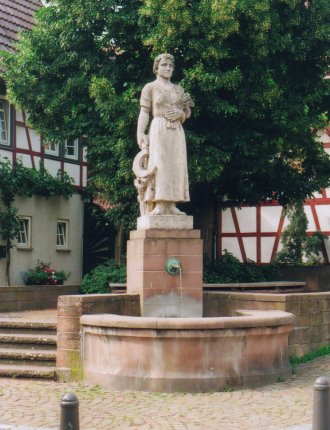 A sculpture of Katharina in Eltingen, Germany. [credit: Monuments on Mathematicians]

Said 'witch,' Katharina, was accused in 1615 by a neighbor, Ursula Reinbold, whose family had a history of disagreements with the Keplers. Reinbold's accusations led the Vogt of her town to issue an arrest warrant for Kepler on several dozen charges of witchcraft, which was no picnic: in 1615 alone, at least 5 women in Katharina's home town had been burned at the stake for witchcraft. Katharina was not only described as being an outspoken and somewhat snarky woman, she reportedly made herbal medicines for herself and neighbors who asked. Combine that with her age--about 70 years old at the time she was accused--and you have the perfect recipe for a witch accusation.

The elderly Katharina was whisked across the country by her most famous son--Johannes, that is--for protection after it became clear that the charges could not be discarded. She stayed with him for several years, returning to her hometown in 1620, since it appeared that the matters had--finally--been dropped.

Unfortunately, time heals wounds--not arrest warrants. A short time after her return, Katharina was abruptly imprisoned on charges of witchcraft and would remain in captivity for 14 months. Along with scores of other accused women, Katharina was kept in chains in poor conditions. All the while, her son was actively working towards his mother's acquittal and release. In a last minute attempt to force her to confess, her jailers confronted her with all of the torture instruments at their disposal and described to her in great detail how they would be used. Katharina is said to have replied: "Do with me what you want. Even if you were to pull one vein after another out of my body, I would have nothing to admit."

Katharina was comparatively lucky: not only was she spared physical torture, she was spared the stake. She was acquitted of the charges, released, and lived out the rest of her life in a new town. 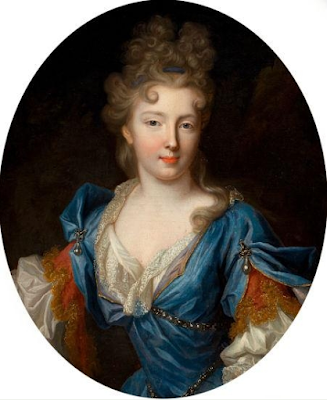 A portrait of Françoise Marie de Bourbon by Pierre Gobert, circa 1690.

I've also found the portrait sitter identified as Françoise Marie de Bourbon, Mademoiselle de Blois, by an unknown artist. Françoise Marie was a child of Louis XIV and his mistress Madame de Montespan. Françoise Marie was legitimized at the age of four, and although she was more fortunate than Katharina in respect to accusations of witchcraft, her mother did not escape becoming entangled in rumors of dealing with the dark arts.

Madame de Montespan was the most prominent of the many courtiers accused during the Affair of the Poisons, an enormous scandal that rocked the French court and ultimately led to the executions of 36 people. Hundreds of people in all were arrested, and many notable members of the court were accused of dealing with sorcerers, alchemists and witches who practiced magic of all sorts. While some courtiers fessed up to buying love potions and charms, it was the accusations of black magic which troubled the King, who created a special private court for investigation and judging those accused.

Many names came tumbling from the mouths of the men and women tortured during the course of the investigation. Montespan was accused of purchasing charms and spells to secure the king's favor and love--and we're not talking cute, sparkly pink love spells like the ones you might find in quirky 80s films about teen witches. The type of magic dear Madame was accused of seeking involved black masses, which would be performed over naked women and required the blood (and entrails, usually pulverized into a potion) of infants.

It appears that once Montespan's name appeared among those accused of seeking out black masses and potions, the private court was ordered to cease operation. Many of the alleged sorceresses and alchemists were imprisoned for the rest of their lives on the orders of lettres de cachet from Louis XIV; the prisoners were forbidden to mention the name of Madame de Montespan--and in some cases forbidden to speak at all. 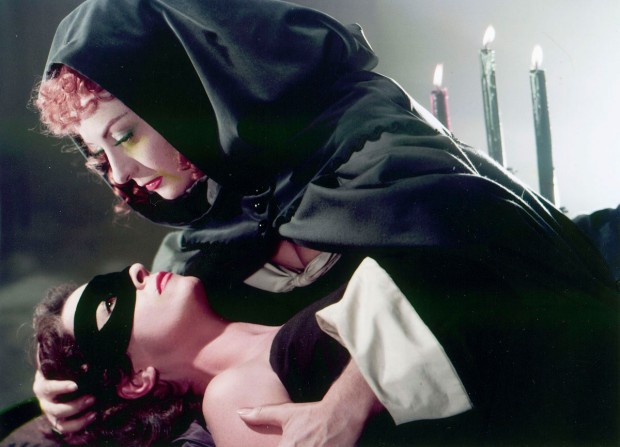 A still from L’affaire des poisons, a 1955 film about the scandal.

If Louis XIV held any ill will towards his mistress for her supposed role in the Affair of the Poisons, it didn't show. She remained at court for more than a decade and retired with all due honors.

Françoise Marie was married at the age of 14 to Philippe d'Orleans, who became regent of France after the death of Louis XIV. According to the memoirs of several of her contemporaries, Françoise Marie had a 'bad temper' which led her husband to nickname her "Madame Lucifer." She was reportedly obsessed with her rank, which rose upon her marriage due to the fact that Philippe d'Orelans was a legitimate (not to be confused with legitimized!) grandson of the king. Françoise Marie reportedly wanted to create a new rank for her children, who were "only" entitled to be Princes of the Blood but were not entitled to the extra privileges that legitimate great grandchildren of the king might enjoy. Françoise Marie survived until the age of 71, dying in 1749 after a lengthy illness.

I was unfortunately unable to find out what private collection the portrait is in, which may have been able to provide more information about the sitter. But the identification of Françoise Marie is certainly very plausible. Costumed balls where guests would dress up in costume were not unusual, even if this particular ball ensemble is more striking to the eye than most.

Where did the "Kepler" identification start, I wonder? One has to hope that Katharina might get a kick out of being envisioned as a beautiful lady in a fancy masquerade dress!
Posted by Anna Gibson at 11:04:00 PM