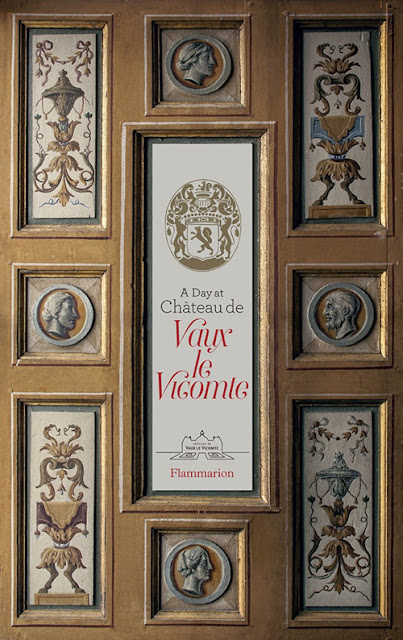 The château's origins are anything but humble. Nicolas Fouquet, the (in)famous finance minister of Louis XIV, purchased the original estate in 1641 and spared no expense--the king's expense, that is--over the next ten years as he designed a château and gardens that boasted the glory of France to all who viewed it. And it was for glory of France that Fouquet racked up bill after bill and employed such talented (and expensive) artists as the architect Louis le Vau and decorator Charles le Brun, both masters of their craft. After all, if Fouquet could grant such expenditures to build a splendid estate, then the kingdom could surely afford to pay back any debtors as well. Keeping up appearances, in Fouquet's case, meant designing, building and furnishing an estate that could rival a king.

It is very appropriate that Nicolas Fouquet once wrote that "Vaux ... is an estate that I considered my primary seat ... and where I wanted to leave a mark of the status I had." Even today, the estate is a testament to the truly stunning amount of grandeur (so stunning that 'Vaux' is considered the precursor to Versailles) that Fouquet incorporated into both the palace and the gardens surrounding them. This grandeur was not just literal, but artistic as well, for the estate is above all things a triumph of design and experience.

Take for instance the seemingly simple act of entering the estate. Fouquet's contemporaries who visited the château would first walk through a wrought iron, open-barred gate--which was refreshingly modern for French palaces at the time. Guests would then continue through the forecourt, across a bridge over the main courtyard, and then finally reach the 20-step staircase which led to the château itself. Yet even then the experience of entering the château was not over: the oval salon that guests were ushered into overlooked the gardens, which were primarily designed by André Le Nôtre. In the apartments on either side of the salon, guests would only need to look up to witness even further wonders: decorated ceilings to delight the eye and inspire the mind.

After Fouquet's arrest in 1661, the estate was seized by Louis XIV for ten years, after which Madame Fouquet was allowed to recover the estate. She retired there with her son and lived there until 1705, when it was sold to the duc de Villars; in 1764, the estate was sold again, this time to the duc de Praslin. The Praslin family kept ownership of the château until 1875, when it was once again sold, this time to Alfred Sommier. By 1875, however, the château and grounds were in desperate need of restoration. Sommier spent decades restoring the palace and grounds to their former glory and after his death in 1908, ownership passed to his family who has dedicated much of their lives to keeping Vaux-le-Vicomte alive.

It was not until 1968 that Vaux-le-Vicomte was opened to the public, which was done in an effort to raise funds to upkeep the magnificant--and magnificently expensive to maintain--estate. In addition to allowing public visitors, the decision was made to allow movies to be filmed on the grounds. The first film to be shot at Vaux-le-Vicomte was Start the Revolution Without Me, a historical comedy starring Gene Wilder, Orson Welles and Donald Sutherland. Since then, dozens of films--including many films and TV series set at Versailles--have graced the estate's gilded halls and lush gardens.

During its heyday, the château was the sight of magnificent shows, feasts and other spectacles of grandeur. Today, the château is still magnificent experience for visitors: there are yearly events, such as a chocolate festival and the Seventh-Century Experience Day; as well as fireworks displays, candlelit evenings, a carriage museum and fine dining experiences. (Countess Cristina de Vogüé has even published a recipe book: Decadent Desserts: Recipes from Chateau Vaux-le-Vicomte)

A Day at Château de Vaux-le-Vicomte is a gorgeous photobook which has 170 color photographs, many of which highlight interesting details that you might miss on a regular visit to the château. In addition to some pretty stunning photography, the book delves into the history of the estate, from Fouquet through its modern-day managers, who actually grew up on the estate.

Yet A Day at Château de Vaux-le-Vicomte book is more than a charming photobook with history to share: it is a moving tribute to Vaux-le-Vicomte itself. At the end of the book I found myself not just knowing so much more about the château, but caring about it in a way I hadn't before.