This deleted sequence was sandwiched between Marie Antoinette's "debut" ball intended to thrust her into the limelight of the court and the artist's ball where she slaps, then kisses, the amorous Orleans. 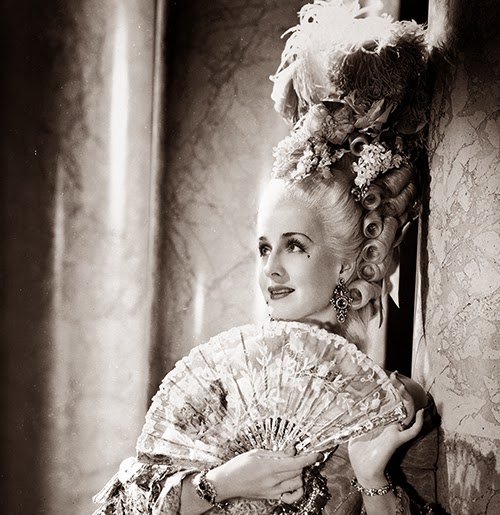 We see what appears to be a charming pastoral scene. in the foreground is a windmill, by a glassy stream that meanders through flowers. A little cow browses there. light falls slantingly upon it. Off scene we hear a gale of light laughter, mingled with cries of,  "Oh, Gaston!" -"Shocking!" - "You bad boy!" etc.

We see now that the Dutch landscape is a headdress that crowns Marie Antoinette's powdered and high-piled curls. Leonard, the hairdresser, is standing on a little ladder dramatically at work on his creation. His assistant stands anxiously by, to hand up hairpins, powder, etc.

Marie Antoinette is seated at her dresser, wearing an extremely decollete negligee. The scene has an atmosphere of almost wantonness for the room is filled with men, satin dandies lounging in free attitudes about her Highness, leaning on the dresser, seated very near to her, eyeing her with impertinence of appreciation. One or two women are also present, including Polignac and Lamballe.

Orleans stands at a mantel in the background. Seated on a stool at Marie Antoinette's feet is the young, beautiful and decadent St. Pre., who has just told the story. They are all laughing at him, laughter which he acknowledges bowing. Leonard wrings his hands because Marie Antoinette's movements impede his progress.

Marie Antoinette (still laughing)
Wasn't there a Queen of France who kissed a poet's lips - because they had said such beautiful things?

Marie Antoinette
I shall kiss yours - because they say such naughty ones!

St. Pre lifts his face eagerly, she bends and kisses his lips.

Marie Antoinette peeps into her mirror.

Marie Antoinette (provocatively)
What do you see, Philippe?

He is watching the scene in the mirror over the mantel, his expression lightly ironical.

Orleans
I see Marie Antoinette - the most beautiful woman in France.

Marie Antoinette (bowing to him in mirror)
Thank you, Philippe!

Leonard (in anguish)
Madame, I beg of you--not to wiggle--this is the moment!

Marie Antoinette (gaily, with uplifted hands)
Silence, all of you -- this is the moment!Q

The Ladies (delighted, breathless)
The moment!

A complete, intense silence falls. Men and women alike gaze enthralled at Marie Antoinette, who sits without stirring. Leonard, with the air of a high priest, touches a spring among the powdered curls. There is a whirring sound -- the wings of the windmill start to revolve gaily. Leonard stands proudly awaiting the artiste's due. it comes in a cascade of acclamation: "Suburb!" "Divine!' "Exquisite!" "Du Barry will expire with envy!" rising above light hand clapping, in which Orleans ironically joins. Marie Antoinette bows her towering elaboration regally to right and left as the camera moves to a big close up of her, windmills whirring, and we DISSOLVE....


This is another deleted sequence whose removal doesn't impact the film very much; it is just another scene intended to highlight the growing extravagance and, in the film's characterization, loose behavior of the "Orlean-ized" Marie Antoinette. We get glimpses in the finished film of how her behavior has impacted public opinion, particularly when Mercy tries to talk sense into her and remarks that she is being openly discussed as a "wanton," and this scene reads like the epitome of her bad behavior. I do think Orleans small role in the scene is interesting. He is participating in the extravagance just enough to be included in the group without actually indulging completely himself, other than to flatter Marie Antoinette. Even while he is attempting to be in her good graces, however, he is still keeping himself far enough removed for a clean escape from her the reputation of her entourage, if necessary.

And I must admit that I wish we could have seen the outrageous pastoral scene coiffure constructed by the film's version of Leonard!
Posted by Anna Gibson at 10:24:00 PM