I was googling today for any new tidbits or information that I could share on this blog, and I came across a review by Alison Freer of xojane.com, who took a look at Versailles '73, a documentary about a little-known, but at the time widely publicized, fashion event that helped provide funding to a Versailles in disrepair. I have never heard of this event before but it sounds like an interesting look at the clash of American and French designers in an extravagant and very 'Versailles' event. Who can resist a fashion battle at the former palace of the queen of fashion herself? 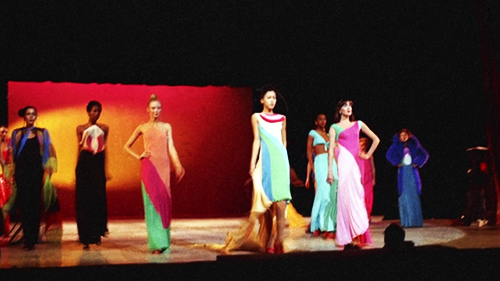 I think it’s the combination of pure glamour and certain doom that initially hooked me on the legend of Marie Antoinette. From the glittering parties she attended to the tragedy of her lonely death, her story hit all the right buttons. So when I heard about a fashion documentary called Versailles ‘73, I was instantly intrigued. What in the hell was happening at Versailles in 1973 that could possibly be worthy of an entire documentary? And being a superfan of 1970s fashion and Marie Antoinette, how did I not already know about it?

The answer is that a LOT of self-professed fashionistas don’t know the story of what went down at Versailles in the fall of ’73. And it’s a shame, because the story to be told is one of triumph -- a great moment in time that just so happened to put American fashion firmly on the map.

In 1973, Versailles was in terrible disrepair -- plagued by leaks, termites and worms. American fashion publicist powerhouse and CFDA creator Eleanor Lambert cooked up the idea of a charity fashion show (meant to help fund repairs) featuring 5 French designers and 5 American designers, to be held at Versailles in the Royal Opera...

...Versailles '73 is a brilliant retelling of a fierce moment in time when American fashion was finally looked upon favorably. Before the show at Versailles, American sportswear was really just an afterthought in fashion circles. But from that point forward, American fashion was a in the spotlight in a HUGE way. The film is also an excellent primer on the 10 designers involved, and paints a compelling picture of the changing times of the early 1970s.


Versailles '73 is currently available on DVD and digital video. I'll definitely be giving it a look!
Posted by Anna Gibson at 11:19:00 PM