18th Century Treasures at the Detroit Institute of Arts 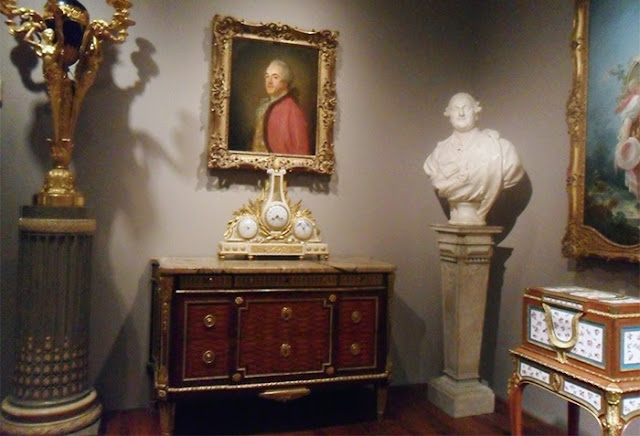 The Detroit Institute of Arts, whose priceless collection may be at risk due to Detroit's recent declaration of bankruptcy, is a veritable treasure trove for anyone with an interest in the 18th century. On any given afternoon, a visitor to one of the museum's 18th century sections can view exquisite portraits, silver beauty cases that once graced the boudoirs of fashionable ladies, and painstakingly handcrafted furniture--and that's just including the pieces that are currently on view!

Among the museum's wonderful 18th century collection are a few items that I consider especially dear to my heart--items, and this will likely not come as a surprise, with some connection to Marie Antoinette, Louis XVI, or other people from 18th century France. 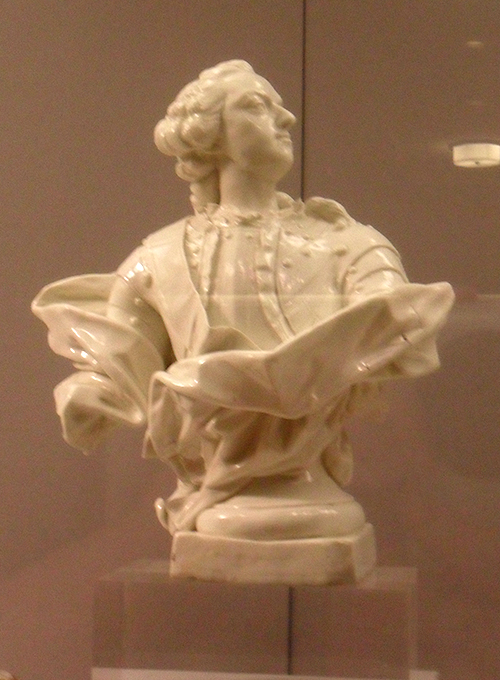 A miniature bust of Louis XV, circa 1755, created in Belgium.

This small sculpture, on loan from the National Museum of American History,  was made after a larger piece by Jean-Baptiste Lemoyne. Lemoyne was a sculptor best known for his Rococo, free-form sculpting style, which was sometimes heralded as the "downfall" of classical sculpting which had a stricter composition. Unfortunately, many of his important pieces (such as an equestrian statue of Louis XV created for a military academy) are no longer here--some were destroyed during the French Revolution, while others have simply disappeared. Although the original version of this particular bust seems to have disappeared, another sculpture of Louis XV by Lemoyne is safe in the collection of the Chateau de Versailles. 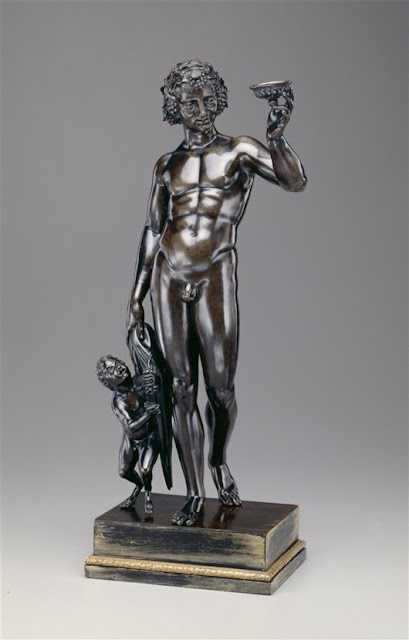 A bronze statue of Bacchus and a Young Satyr, circa 1640, by an unknown artist.

This sculpture of Bacchus (the Roman name for Dionysus) was purchased by Louis XIV in 1707, probably for the palace of Versailles; it passed into the collection of Louis XV and Louis XVI, where it remained until his death in 1793. Something that always crosses my mind when I see relatively small art pieces that were once housed in palaces: in the grand scheme of things, was it an important piece? Did anyone ever stop to look at it, among the many pieces of art in the many rooms of the many palaces? Or was it just another statue to gather dust until someone could be bothered to wipe it down? 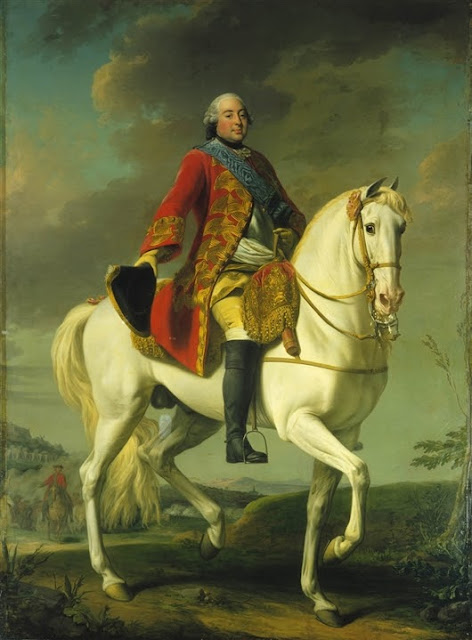 A portrait of Louis-Philippe, Duc d'Orleans, saluting his army on the battlefield, 1757, by Alexandre Roslin.

Louis Philippe I, father of Philippe Égalité, became the duc d'Orleans and the First Prince of the Blood after his father's death in 1752. Although he was later known for his numerous mistresses, Louis Philippe first distinguished himself during the War of the Austrian Succession. This portrait is an excellent example of the military portraits that many high-ranking nobles would have commissioned after returning from battle. Perhaps Louis Philippe, who had by this time settled into the scandals of court life, wanted to be reminded of his glory days on the battlefield. 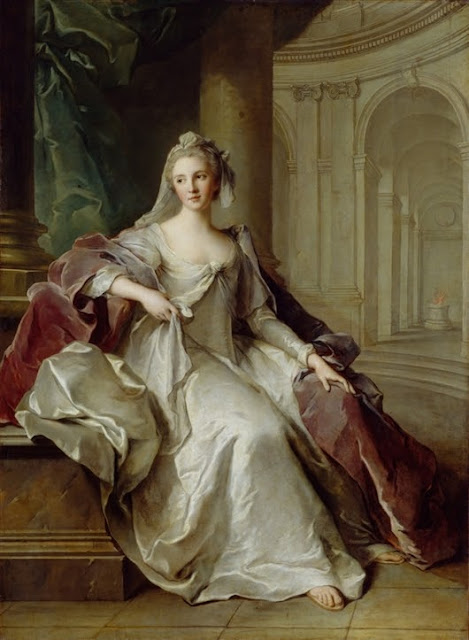 Note: The identity of the sitter in this portrait has recently been disputed; it may depict Madame Henriette de France, a daughter of Louis XV; or Louise Henriette de Bourbon-Conti.

Louise Henriette de Bourbon was the first wife of Louis Philippe I, duc d'Orleans. Her marriage was intended to help heal the rift between the Bourbon-Condé and Orleans families--a feud which had its source in Henriette's grandmother and great-aunt, both daughters of Louis XIV and the marquise de Montespan.

In this particular painting by Nattier, Madame Henriette--in the prime of her youth, at only 23 years of age--is depicted as Vestal Virgin.

The choice of Henriette as a Vestal Virgin may have been seen as ironic by her contemporaries. Although Henriette's reputation before her marriage was relatively pristine--she was raised in a convent and thus far nothing had marred her image at court--her scandalous behavior quickly led to a downfall in her reputation. She was rumored to have indulged in scandalous affairs--so many, in fact, that her father-in-law was said to have contested the paternity of her children. She gave birth to three children--only two of whom, the future Philippe-Égalité and Louise Marie Thérèse Bathilde, survived infancy. She died in February of 1759 at the age of 32; her exact cause of death is unknown, but the rumor mill at court attributed her early death as a consequence of her "debaucheries." 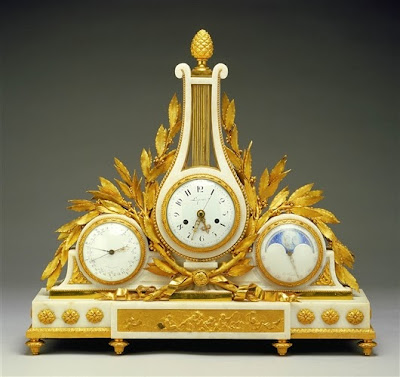 A marble mantel clock, circa 1784, by Jean Antoine Lepin and Etienne Martincourt.

This ornate mantel clock was ordered by Madame Adelaide and Madame Victoire de France, the remainder of the 'Mesdames,' daughters of Louis XV, for the summer reception room at the Chateau de Bellevue. Bellevue was their favorite retreat and after the ascension of Louis XVI and Marie Antoinette to the throne, the aunts often retreated to their chateau, which was later said to have been one of the "hotbeds" of the anti-Antoinette gossip mill. The clock was delivered to the chateau in the summer of 1786; the two aging Mesdames would not get to enjoy their exquisite timepiece for many more summers.

Unusually, the piece was not sold in the mass government estate sales which sold off much of the collections of the royal palaces, but instead remained in the government's collections until 1808. In 1808, Napoleon gifted the clock to Jean-Jacques-Régis de Cambacérè, who in turn sold the piece in 1816 to the dowager duchesse d'Orleans. It remained in various French collections until the 1930s, when it was acquired by Anna Thomson Dodge, who gifted the item to the museum in memory of her late husband. 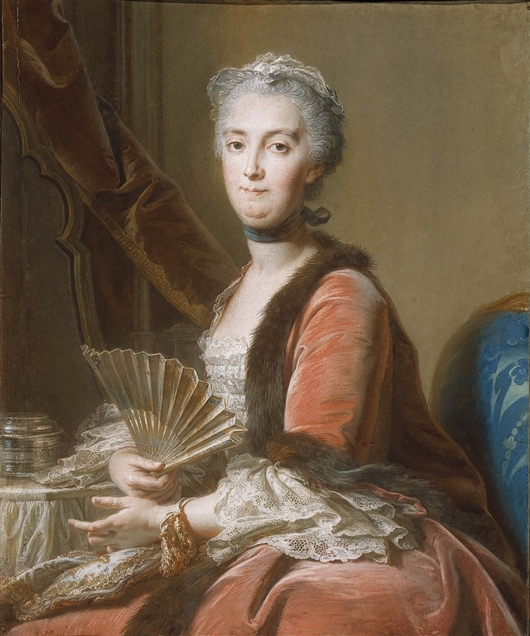 Anne Marie Louise Nicole, also known as the comtesse de Sénozan, was one of several daughters of Guillaume de Lamoignon and sister to the famous William Christian Guillaume Lamoignon-Malesherbes, who defended Louis XVI at his trial. This portrait, completed when she was about 33 years old, depicts her in a red gown trimmed with rich furs and a cascade of fine lace peeking out from her sleeves.

Anne married Jean Antoine Olivier de Sénozan in 1735; they had only one child, Antoine Francoise, who died in 1769. Antoine had one child, a daughter named Sabine, who was executed in July of 1794.

She decided against emigration during the revolution due to her advanced age; however, she was arrested in 1793 due to her connections with former emigres and, most likely, her brother's decision to defend Louis XVI. Due to a lack of space in local prisons, she was kept under house imprisonment until April of 1794 when she was transferred elsewhere.

In May, the comtesse was brought to trial with a group of other prisoners, including the king's sister Madame Elisabeth. All were sentenced to death for "conspiracy against the Revolution." Anne Marie, along with all the other female prisoners who accompanied the princess to the scaffold, curtsied to the princess and asked to kiss her before walking up the scaffold steps. Anne Marie was 75 years old when she was executed. 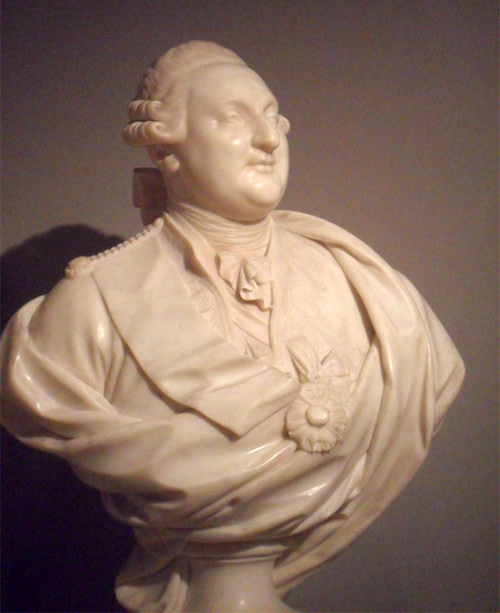 A bust of Louis XVI, 1796, by Robert Lazzarini. I wish I could provide more commentary but unfortunately there is not much information--and by "not much" I mean "zilch!" about this artist on the web. Still, I love seeing this bust of Louis XVI clustered with a few remnants of his family--it is currently displayed alongside the commode of Madame Elisabeth and the mantel clock of his aunts. 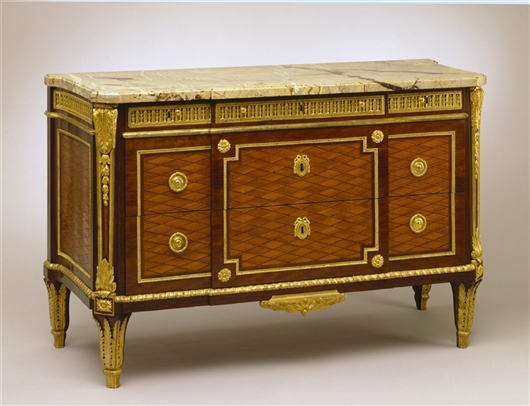 Whatever the specific history... I must admit that this is one of my favorite pieces at the DIA. I know, I know! It's a chest of drawers. Perhaps neither Madame Elisabeth or Louis XVI ever touched it, or noticed it. (But perhaps they did!) There is just something about the simpleness of the object which is what continually draws me to it whenever I visit the Detroit Institute of Arts. All of these pieces, and so many more, feel like old (in most cases, very old!) friends who have been waiting for a visit. What a shame if they were sold off like so much junk at a yard sale.