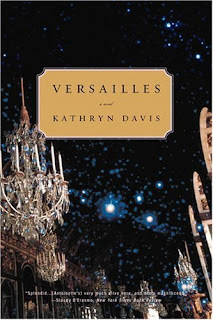 Versailles: A Novel by Kathryn Davis is not your everyday historical epic about Marie Antoinette. It tells the story of the ill-fated queen in a series of scenes and vignettes, supplemented with several poems and play scenes. She begins as a 14 year old girl on her way to the splendid palace of Versailles, and ends as a ghost of her former self, walking up the steps to the guillotine. In between, we learn of her hopes and dreams, her fears, her life as she moves from gilded room to gilded room at Versailles, or breathes the fresh air at her beloved Petit Trianon.

This was such a different read for me. I was hesitant at first, because I wasn't sure that the writing style would hold up for the entire novel, but I was pleasantly surprised by how much the prose sucked me into the world Davis has crafted.

Although Versailles covered her life from birth to death - and after - it did so in a refreshing, experimental way. Unfortunately, the detailed nature of many historical novels can leave the reader feeling dry and overwhelmed. Davis' brief style was very engaging and a completely different take on how to write a historical story. Most of the vignettes were told from Marie Antoinette's point of view, but it never felt stale or static. Davis carefully cultivated Marie Antoinette's changes and growth, resulting in a human portrait of a woman who gained more courage in several years than many will ever do in a lifetime. Marie Antoinette's words were alternatively charming, passionate, witty - and as the revolution waged on, desperate, somber, and finally, haunting.

Unlike a typical historical novel, Davis assumed the reader has a familiarity with the subject. This decision did make for a more lively read, as there didn't need to be additional paragraphs explaining the details of every event in her life. However, this could be a hindrance to those who are not familiar with the history. For example, Davis did not stop to explain that Marie Antoinette had two sons, so the reappearance of "the Dauphin" after he (Louis Joseph) was described as dying may confuse some readers. Davis didn't describe political situations at length, nor did she take much time explaining historical characters... in some ways, felt like a novel for those who have studied her life, or at least the time period. I did appreciate that Davis touched on the subject of historical debate - of course, using Marie Antoinette's witty prose to make her point. Marie Antoinette takes a jab on the speculation surrounding her alleged affair with Axel Fersen: "Nor does it matter, really, if Axel was my lover, in the physical sense at least... It matters to historians, most of them men. It matters to gossips, most of them women. The pleasure is in the speculation... Were we sexually intimate? What difference could it possibly make to you?"

This novel may not be for everyone. If you are looking for a detailed fictional account of Marie Antoinette's life, I don't recommend this book. But if you are hoping to find something new in the world of Marie Antoinette fiction, I highly recommend picking it up!
Posted by Anna Gibson at 6:13:00 PM