Book Review: The Lacemaker and the Princess by Kimberly Brubaker Bradley 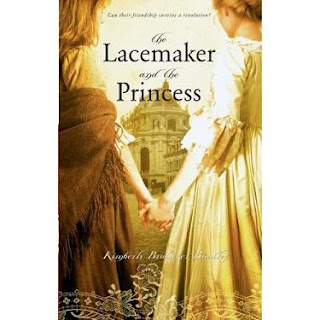 The Lacemaker and the Princess by Kimberly Brubaker Bradley tells the story of Isabelle, a young, third generation lacemaker living in Paris. She is sent to deliver lace to the Princess de Lamballe at the palace of Versailles, but is nearly trampled by courtiers who are in a mad rush to see the queen. It is the queen herself who comes to Isabelle's rescue, and invites her to play with her own daughter, the princess Marie Therese Charlotte. Isabelle is invited to return to the palace each day, and she enjoys the luxury and privilege only afforded to a select few in France.

But Isabelle begins to struggle with the complete opposition of her two separate lives. At Versailles, she is the playmate of a princess. She is dressed in fine clothing, and fed more food at one royal supper than her family eats in several weeks. in Paris, she lives in a small home with her mother and grandmother, both of whom need more and more help to keep up with the tedious and even painful task of making the fine laces that drip from the gowns at Versailles.

As revolution brews in Paris and at court, Isabelle herself begins to wonder: Is it fair for some to live in luxury, while others mere miles away starve to death?

This is one of my favorite youth novels set during the French Revolution. The focus on Marie Antoinette's daughter was a pleasant change from the flood of Marie Antoinette in fiction, as was the inclusion of Ernestine, an actual girl that Marie Antoinette raised alongside her real daughter. Brubaker greatly surprised me by not relying on stereotypes or black and white morality when approaching the subject of the revolution. It's a very refreshing change from typical youth fiction set in this time period! She does not condemn any particular point of view, and allows Isabelle - and the reader - to make their own judgments about the revolutionaries, the royal family, and the revolution itself.

My only complaint about this novel is that the ending seemed strangely quick and abrupt. I wonder if perhaps Brubaker was told to "wrap things up" by an editor and condense the last events of the novel into a few brief pages, because the rest of the book was written at a nice pace, even for adult readers.

That small complaint aside, I can't recommend this book more highly for youth or adult readers. It really seems like one of "those" books that gets a younger reader more interested in history, and I truly hope it will be!
Posted by Anna Gibson at 4:10:00 AM