Book Review: The Princess in the Tower by Sharon Stewart 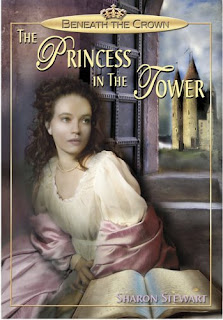 "They want me to remember everything that happened, and to write it all down. Do they think I could forget any of it? My god, do they think I don't wake up in the dark of night, remembering? ... I will give them the account they want. ... But my own deepest feelings I will not tell them. Not for them this story, the real story, of our journey from sunshine to shadow..."

The Princess in the Tower by Sharon Stewart begins in October 1795, as the young princess, Marie Therese Charlotte, is told to write her account of the last tumultuous years of her family's life. She agrees, but is determined only to give them the cold facts, and not her true memoir. The "true memoir" is the book. The reader is then quickly taken back to June 1789, much happier days for the princess and her young brother, Louis Charles. But the days are not so happy for their parents, Marie Antoinette and Louis XVI, nor for the adult world inside and outside the palace. Although the children are largely ignorant of what's really taking place, and are content to play games of hide and seek in the narrow servant's corridors, the events of the revolution quickly force the harsh reality into their lives. The revolution takes Therese and her family from the glitter of Versailles to imprisonment in the Temple tower, and she must struggle to remain strong as everyone she loves is taken from her - all the while wondering, "Will I be killed next?"

This book was initially published as The Dark Tower, but was republished under its new name as a part of the Beneath the Crown series. The series, intended to be similar to The Royal Diaries, was short-lived - only three books were published before the line was discontinued.

I'm glad it was republished by Scholastic as a Beneath the Crown book, because otherwise I might never have come across it while browsing Scholastic's web pages! I really enjoyed this book, particularly because it was from the perspective of royal couple's daughter and not (as it tends to be) from Marie Antoinette's point of view.

Although the book was similar to the style of books in the The Royal Diaries series, it was not told in a day-by-day diary format, but instead in a series of longer memoir chapters. This was not a problem, however, as Stewart's writing style keeps the events moving and alive. Stewart was able to capture the voice of the young princess as she grows from a childish, somewhat spoiled girl into a teenager who had gone lost everything and everyone in her life.

Naturally, many historical events and characters were simplified or tweaked for this book, because of its intended age range. The only historical change that I definitely did not agree with was Stewart's complete removal of Louis Joseph and Sophie, Marie Antoinette's other children. The book's events began in June of 1789, the month that Louis Joseph died, but there wasn't mention of him throughout the entire book. I admit I'm baffled at completely ignoring their existence entirely, because their deaths, and Louis Joseph's in particular, would have had such an impact on Marie Therese and her family.

I do highly recommend this book, however, because it does provide an intimate perspective on Marie Therese's childhood and personal growth throughout the revolution. I believe that younger and older readers will enjoy this read for the fresh material and different point of view it brings.
Posted by Anna Gibson at 2:15:00 PM