What They Said Saturday: "... the royal family forgetting themselves in their anxiety for those around them." 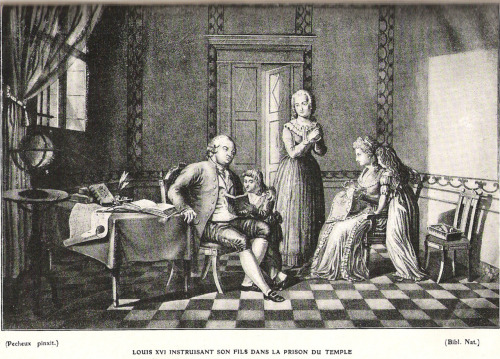 image: The Royal Family in the Temple, reproduced on a postcard
When the royal family was originally moved to the Temple, the Great Tower--where it was decreed the family would be held--was not yet prepared for residence, as it had been neglected in recent years. It was decided that the family would be temporarily kept in the little Tower, using furniture taken from the Tuileries, until the Great Tower could be properly furnished; and more importantly, until it could be properly fortified so that it could be kept isolated and guarded from the outside.
In her memoirs, the duchesse de Tourzel recalls the early days of the family's captivity; the duchesse, along with her daughter and the Princesse de Lamballe, would later be arrested and taken away from the Temple. In the meantime, however, she recalls how the royal family enjoyed an uneasy yet intimate family life.

As the Queen's room was the largest, we occupied it during the day, the king also coming down to it early in the morning. ... a Commissioner of the Commune, who was changed every hour, was always in the room where they were. The royal family conversed to kindly with all of them that they succeeded in making an impression on several.

At meal-times we went down to a room underneath that of the Queen, which we used as a dining room, and at five o'clock in the evening their Majesties took a walk in the garden, for they dared not let Mgr. the Dauphin go out alone, for fear of giving the Commissioners the idea of taking possession of him. On this subject they several times heard very sinister remarks which they pretended they did not hear, and the promenade lasted sufficiently long for the two children to get the fresh air so necessary for them, the royal family forgetting themselves in their anxiety for those around them.