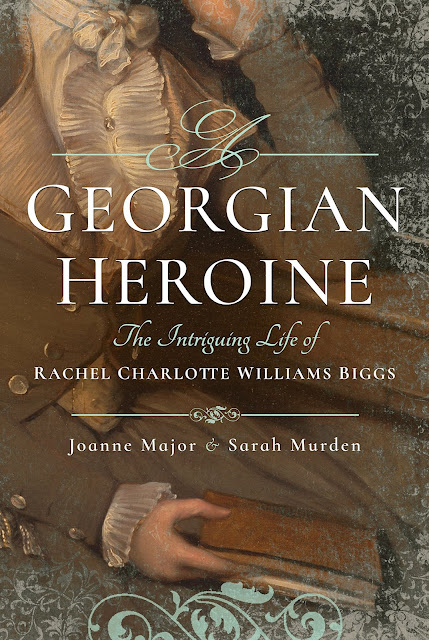 A Georgian Heroine: The Intriguing Life of Rachel Charlotte Williams Biggs by Joanne Major and Sarah Murden is an exploration of the life of a woman who, though not a major public figure kept in the public eye down the centuries like some of her contemporaries, nonetheless led a life that was at turns tragic and triumphant.

Rachel Charlotte Williams Biggs, who would later prefer to go by "Charlotte," was born into a respectable family with some, though not exceptional, wealth. The primary events of Charlotte's story as covered in this book begin with horror: she was targeted by a neighbor who kidnapped, raped and imprisoned her. When she was finally able to return home, her father was so shocked at her appearance that he challenged the neighbor to a duel.

Although she managed to escape him once, she was later brought back under his control after being kidnapped and taken by barge to a secluded estate. She would later manage to leave with the assistance of Benjamin Hunt Biggs, and she turned to France, where she--like many others--was swept up in the events of the French Revolution. After her time in France, she took to both writing and politics in an effort to share her story and make an impact on the world around her. She was involved in some form of espionage and her correspondence from her later years is at turns politically adventurous and bittersweet, particularly in regards to her re-connection with and old flame.

The snippets from her little known play, What Is She? stood out to me for incorporating what can easily be read as Charlotte's sentiments regarding her own experiences.

"But where [to] find such a lover, such sincerity? Where is the man who has not to reproach himself with the misery of women? Is there a female who has not, some time in her life, been the victim of her sensibility? ... At an age when our hearts are tender, and our reason weak, we make the choice which is to fix our destiny forever..."

As the authors relate, Charlotte's version of events, both in regards to her second imprisonment and her years in France, do not always line up the known facts. For example, in some instances the authors tracked down moments where Charlotte claimed to have been in certain regions of France during the Revolution when the facts suggest she was in a different location altogether. What was her reason for lying, in this case? To spice up her story? Was she confusing her own experiences with that of someone else, and her memory was confused by time and stress? The answers are not always clear.

I greatly appreciated it when the authors pointed out that Charlotte may have been exaggerating or otherwise confusing her own narrative with those of the people around her. I also appreciated the amount of effort it must have taken to find the various letters and texts included in this book, all of which helped flesh out a greater understanding of Charlotte's unique life.

Retracing the steps of someone who did not necessarily make a big, public splash on history is not always easy. But Murden and Major have definitely stepped up to the plate in regards to fleshing out the life of Rachel Charlotte William Biggs as much as possible.

I would recommend A Georgian Heroine: The Intriguing Life of Rachel Charlotte Williams Biggs for anyone who is interested in learning about a little-known woman from history whose story, alternatively tragic and triumphant, deserves to be known.

[A review copy of this book was provided to me by the publisher]
Posted by Anna Gibson at 10:11:00 AM