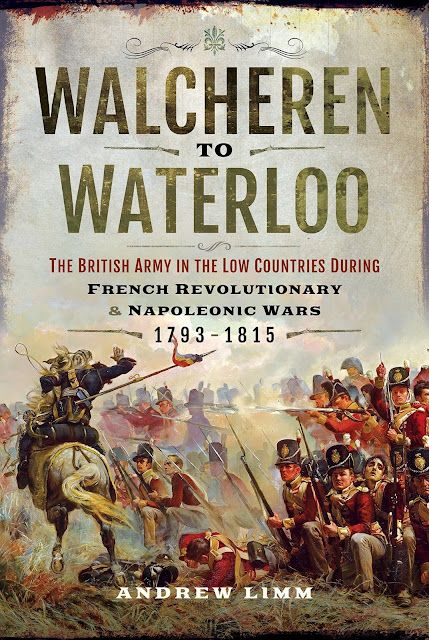 Much has been made of the greatest successes of the British army during the French Revolutionary and subsequent Napoleonic wars--but what of the campaigns which tend to be glossed over due to their relative and sometimes catastrophic failures? In Walcheren to Waterloo: The British Army in the Low Countries during French Revolutionary and Napoleonic Wars 1793–1815, Andrew Limm tackles a period often ignored by military and social historians alike in favor of Britain's symbolically glorious battles: the British army's failures in the Low Countries, spanning from 1793 through 1815.

The heavy focus on the British military success during its decades-long skirmishes with France has its history, as Limm notes in his introduction, in a sweeping histiographical tradition which began in the 19th century; this tradition is rooted in the need to boost British morale and paint a picture of the British military in all of its triumphs, not its failures. Subsequently, the battles that were lost, the campaigns which failed, and the sometimes shocking lack of preparation are swept aside in favor of Hollywood-esque portrayals of the grand victories that have been the subject of dozens of books. Walcheren to Waterloo is therefore a notable and sometimes sobering contrast that provides a critical look at the failures which led to defeat after defeat in the Low Countries.

The first few chapters of the book lay down the foundational context for the campaigns covered in the second half. Some readers may quickly note that only four of the six British campaigns in the Low Countries are covered in this book. Although I wish the other two have been covered for completion's sake, since the book itself errs on the succinct side, the four campaigns covered work well enough as an introduction and readers who want to know more about the remaining two engagements will be able to springboard from 'Walcheren to Waterloo' into further reading.

Limm's analysis is frequently punctuated by contemporary accounts of these battles which have not been frequently studied or published in comparison to accounts from Britain's more successful campaigns. These accounts provide a compelling and necessary ground view of the Low Countries campaigns. In his exploration of the 1799 Anglo-Russian campaign into the Helder, Limm provides a quote from Sir John Moore (1761-1809) that deftly summarizes many of the problems that would plague the Low Countries campaigns as a whole:

"My brigade, as a consequence of five hours' constant movement and action in so broken a country, were dispersed and infinitely fatigued and from the absence of some of the regiments which had not been able to keep up on the left, the enemy had struck upon the flank of the 25th Regiment, which was the mmost forward. The fire was extremely galling. Three companies of the 92nd regiment were sent to their support; but coming in so incautiously into so hot a fire, they suffered prodigiously, and the whole began to give way..."

Moore was shot soon after and he noted that "Just before I received this shot I saw the impossibility of rallying or stopping my men under such hot fire."

While Limm's text is largely readable, there were some occasions where I did need to do some quick online research to clarify an unexplained name, battle or unit number.  I feel that readers who already have a solid knowledge in the French Revolutionary and Napoleonic wars may not need to do as much searching as I did, but I admittedly am not well-versed on the technical aspects of French Revolutionary and Napoleonic military campaigns.

Overall, Walcheren to Waterloo: The British Army in the Low Countries during French Revolutionary and Napoleonic Wars 1793–1815 by Andrew Limm (Pen and Sword Books) is a compact yet interesting piece often missing from the larger puzzle of British military campaigns during this chaotic time period. I recommend this book to anyone who wants an introduction to this often-ignored aspect of Britain's military engagements with France from 1793 through 1815.