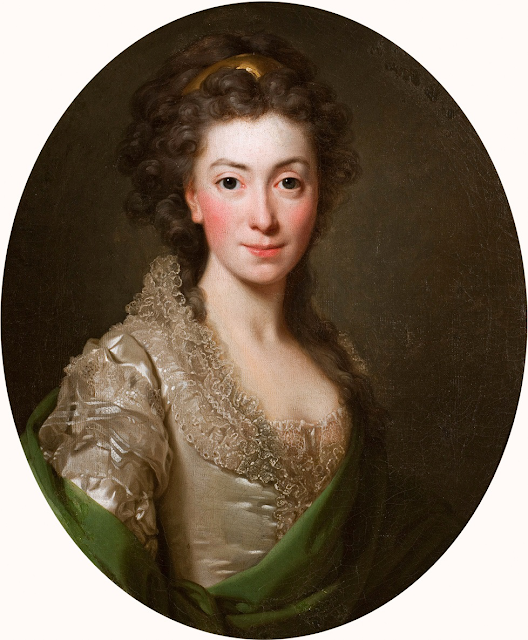 [image: A portrait of Izabela Czartoryska by Alexander Roslin, 1774]

Elżbieta "Izabela" Dorota Czartoryska (1746-1835) was an art curator, writer and princess who became known for her progressive views and sometimes scandalously retrieved collection. She founded several museums, including the first museum of Poland, Czartoryski Museum--a museum that recently reopened in 2019 after nearly a decade of restorative work. Izabela was well-known and somewhat notorious for her art collecting, as she would go to any means necessary to obtain objects she set her eye on.

In some cases, she would go so far as to steal pieces for her collection, particularly if she was denied a chance to purchase something. She once snipped a fragment of a smock owned by Gustavus Adlophus of Sweden for one of her museums; in another instance, she took a pen used by Frederick II from his desk. When confronted by the king at a court luncheon, she said, "Sir, that theft cannot be an insult to Your Majesty, for you must be a person of exceeding brilliance and exceptional fame if a Polish woman values your pen so highly." He laughed and Izabela kept the pen.

Not all of the objects Izabela collected were so mundane. In 1789, she obtained bones purported to be from 15th-century Burgandian soldiers by stealing them from a chapel. Her own description of the events: (translation: Culture.pl):

"On the way, we noticed a wayside chapel with an iron grille. According to a sign, for nearly four centuries the chapel had sheltered the bones and remains of Burgundians killed during the famous battle in which Charles the Bold, Duke of Burgundy, was defeated by the Swiss in 1477. (…) Looking at these relics, I pondered upon how, in the past, they had belonged to famous warriors, valiant soldiers (…).
Moved by it all, and unable to resist the temptation, I reached through the bars and took one of those bones, to place it with the other relics at the Gothic House. Soon afterwards, the newspapers reported that the chapel in Morat had been completely destroyed during the French Revolution, along with many other monuments, and the bones had been scattered, so no other mementos of the valiant Burgundians are left in this world, except in Puławy."

In 1775, just one year after this portrait was painted, Izabela and her husband (Adam Kazimierz Czartoryski) began hosting an Enlightenment-centric court at their famed Czartoryski palace. They invited other notable Polish Enlightenment figures and discussed politics, art, literature and philosophy of the day. Thanks to Roslin's charming portrait, one can easily imagine the fresh-faced Izabela, cheeks rubbed with rouge and hair delicately curled, excitedly discussing the latest and greatest events of the day.