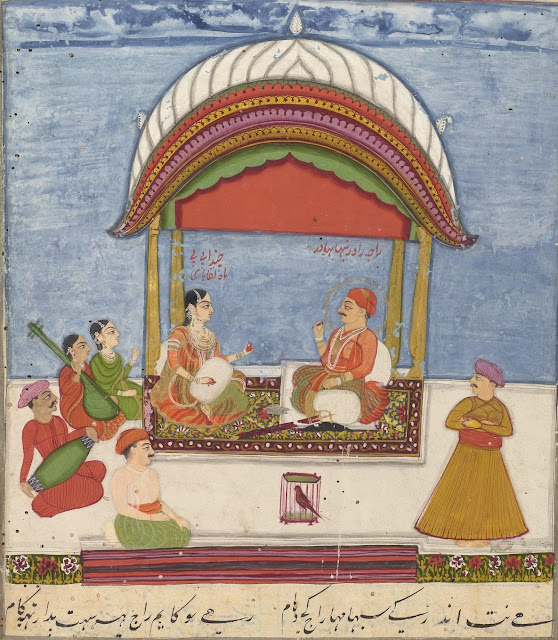 Mah Laqa Bai (originally Chanda Bibi) (1768-1824) was a respected, influential poet and courtesan. As a young girl, she was given an exemplary education and was invited into the inner circles of high ranking officials. She accompanied the second Nizam of the Hyderabad State into three wars, where she was well-known for her horseriding and archery skills; she was routinely awarded with lands, appointed to the highest circle of nobility, and given the honorary title Mah Laqa--which means "Visage of the Moon."

One of Mah Laqa Bai's most notable accomplishments was her poetry, which was well-received and published in several different collections. One collection, titled Diwan e Chanda, contained a stunning 125 ghazals. She became the first women to read her poems at a mushaira, or spoken poetic symposium, which was traditionally reserved for men. In some cases, she sung her poetry or sung poetry and songs written by other prominent courtiers and nobility.

Upon her death, she left all her properties (which included copious amounts of jewelry, silver, gold and lands) to homeless women in Hyderabad.

This poem is from Gulzar-e-Mahlaqa, a collection of 39 ghazals written by Mah Laqa Bai; the collection was published in 1824, after her death.
Hoping to blossom (one day) into a flower

Hoping to blossom (one day) into a flower,
Every bud sits, holding its soul in its fist.

Between the fear of the fowler and (approaching) autumn,
The bulbul’s life hangs by a thread.

Thy sly glance is more murderous than arrow or sword;
It has shed the blood of many lover.

How can I like a candle to thy (glowing) cheek?
The candle is blind with the fat in its eyes.

How can Chanda be dry-lipped. O Saqi of the heavenly wine!
She has drained the cup of thy love
Posted by Anna Gibson at 3:04:00 PM