Women's History Month: "My entry into this world was not met with joy." 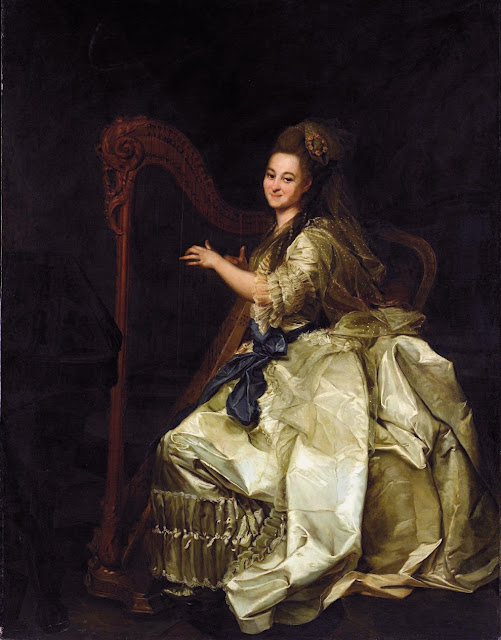 Glafira Ivanovna Alymova (1758-1826) was a Russian noblewoman, lady-in-waiting to Catherine the Great, harpist and writer. She was born the daughter of a colonel and a noblewoman.

Alymova's birth was a sad occasion for her family. Her father died before she was born, and she would later write in her memoirs:

"My entry into this world was not met with joy. A child born at her father's death, I began life with sinister omens of the wretched fate that awaited me. My distraught mother could not bear the presence of her poor nineteenth child and removed my cradle from her sight, and a father's tenderness could not answer my first cries."

Her mother never recovered from the shock and pain of her husband's death, and when the young Glafira was sent to boarding school she realized with pain how much her own relationship with her mother differed from her peers. "Out of fifty girls I was almost the only one who had not experienced parental tenderness."

She was one of the first graduates from the Society for the Education of Young Ladies and the Nobility, founded in 1764; this society, today known as the Smolney Institute, was the first formal educational organization dedicated to teaching women. 'Smolney' was intended for the education of noble girls, whereas another institute was established for the education of "common" girls. The institute was established originally under the patronage of Catherine the Great, and would continue to be patronized by Russian empresses until the Russian Revolution.

Upon graduating from boarding school, she reunited with her mother and experienced feelings of renewed, yet fleeting tenderness. "In one moment her kindness effaced all those past impressions and her trust opened before me a touching image of virtue struggling with adversity. My mother's grief strengthened even more my attachment to her." Her mother died shortly thereafter and Alymova noted that "my feelings toward my mother ... had been artificially nurtured by me. Without encouragement, they vanished without three months."

Although her own mother kept the young Glafira distant on an emotional and then physical level, there were many people who soon found joy in her birth. She was taken under the wing of the headmistress at her school, and she was much beloved by the Russian imperial family. Even during her childhood years at Smolney, she was sent gifts of flowers, letters and other trinkets from the imperial family. Upon graduation, she was awarded personally by Empress Catherine and made a lady-in-waiting.

In 1777 she married a nobleman and writer Aleksei Andreevich Rzhevsky; their marriage was tumultuous at first due to the couple's decision to live with the 64 year old Ivan Betskoy, a nobleman who had supported the young Glafira during her school years and who professed romantic intentions towards the now graduated young lady. According to Glafira in her memoirs, Ivan asked her to choose what she wanted him to be, "husband--or father?" She chose father and though he apparently agreed to her wishes, his evident jealousy caused Glafira and her husband to move out on their own shortly after.

During the reign of Emperor Paul, she and her husband fell out of favor with the imperial court. Her husband died, leaving behind significant debts; her favor was restored by Alexander I, and he gave her a significant widow's pension.

In 1805, however, she caused scandal by marrying a young, non-noble man 20 years her junior. The man, known as Ippolit Masclet, was a French teacher. The scandal was short-lived, at least officially; after receiving the blessing of Tsar Alexander, Glafira was able to obtain a chamberlain's position for her husband at court and resumed living in royal favor.

She died in 1826. She and her first husband had one child, Mariya Svistunova, who died in 1866. One of Mariya's daughters, born in 1804, was named after her grandmother Glafira.