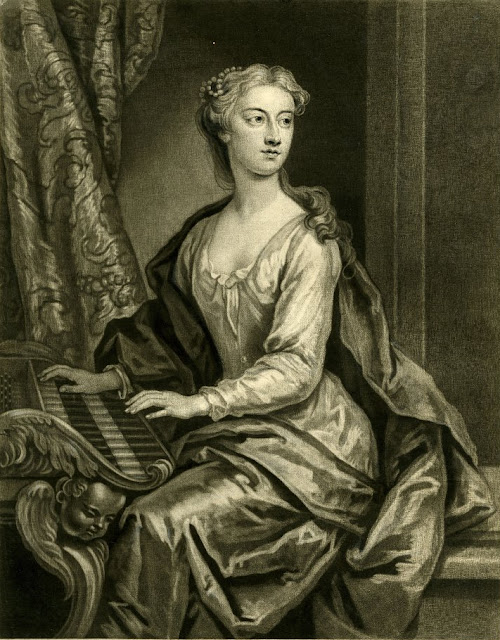 [image: Engraving proof of Anastasia Robinson by John Faber the Younger, after a portrait bo John Vanderbgank. Circa 1727.]

Anastasia Robinson (c.1692-1755) was an English singer who became well-known for her work with the famous composer George Handel.

Robinson was the daughter of Thomas Robinson, a portrait painter. She received private musical tutoring from an early age and performed primarily at private concerts, where she would both play and sing. By the time she was in her early 20s, she was already associated with George Handel; in 1714, he wrote a solo soprano role in his composition 'Ode for the Birthday of Queen Anne' specifically for Robinson. She joined Handel's company in 1714 and made an official debut in 'Creso,' a pasticcio (a type of composite performance).

In 1719, an unknown factor caused Robinson's voice to change. It was during this year that she began singing contralto roles, rather than her former soprano music. It was also during this period that her father's eyesight began failing and she decided to turn her talent into a profession that would bring in an income for herself and her family. She was hired into Handel's Royal Academy of Music, founded in 1720, and began earning £1000 a year for her work. She originated numerous roles in Handel's most famous operas. In 1722 or 173, she secretly married Charles Mordaunt, 3rd Earl of Peterborough; although they were married, he did not acknowledge her publicly as his wife, and she was viewed as his mistress until 1735 when he finally acknowledged their marriage.

Her most famous role was that of Cornelia in Handel's dramatic Giulio Cesare, which would become his most well-regarded and today, most frequently performed work. Cornelia's arias and music for this work are some of the most moving in Handel's entire repertoire, and one must imagine the faith Handel had in Robinson to

Although it would be her most famous role, Robinson retired shortly after the premiere of Giulio Cesare. Although she retired from the professional stage, she was still involved in the world of music and theater; her home in Parsons Green, which she lived on with her retirement earnigs as well as money from her secret husband, became a hub for musicians to train and perform.

After the death of her husband in 1735, she began living at his family residence; she died in 1755.

One of the most moving moments in for Cornelia in Giulio Cesare is Priva son d'ogni conforto, her Act I aria. Cornelia was foiled in her attempted suicide, which she attempted after the murder of her husband, and in this aria expresses her sadness and grief.