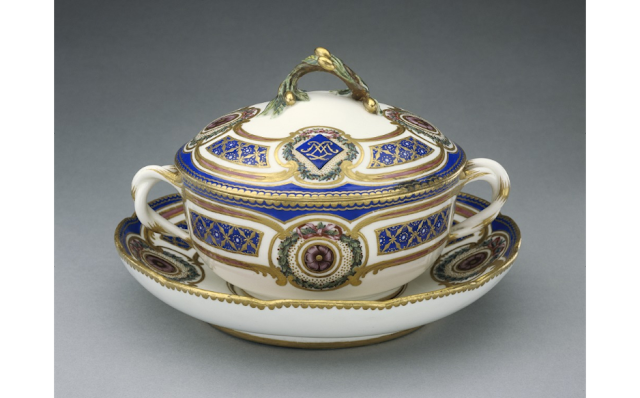 
This decorated porcelain bowl was created in 1764 for Louise-Marie de France, the 8th daughter and youngest of Louis XV and Maria Leszczyńska's children. Louise, along with three of her sisters, was sent as a young child to the Abbaye de Fontevraud  to live as a boarder due to the Cardinal de Fleury's efforts in cutting royal expenses. Madame Campan would later recall ;Mesdames' memories of their childhood at the abbey as being particularly frightful and, in terms of education, neglected; Madame Louise, Campan wrote, claimed that she could hardly read at the age of 12 and it was not until she was allowed to return to Versailles at the age of 13 that she learned to effectively read.

Louise's life at Versailles was much grander than at the abbey, and while she and her sisters threw themselves into their studies and the companionship of their brother the then-Dauphin, the yrecived little affection from their father. Louis XV notoriously referred to his children with teasing nicknames--he referred to Louise as "Rubbish."

A courtier later wrote of Louise that she of all the sisters was "passionately fond of every pleasure, was something of a glutton, very fond of dress, incapable of living without every new invention of luxury, had a lively imagination and great leaning to coquetry." This ornate bowl, unusually decorated with both Louise's monogram and the coat of arms for an unmarried French royal princess, would have fit in well with Louise's then-love for worldly pleasures. Louise would have typically sipped bouillon and other light broths from the bowl, either in between meals or on days when she preferred something light.

Coincidentally, the bowl was finished in 1764, a year which marked the beginning of the end of Louise's love for life at Versailles. iIt was in 1764 that Louis XV approved the banishment of Jesuits from France, an act which Louise abhorred. From 1765 to 1768, Louis endured te deaths of close family members, including her beloved brother, his wife, her own mother, and her nephew. In June of 1768, Louise asked the Archbishop of Paris to plead with the king to approve her request to enter into the Carmelites convent at St. Denis.
Posted by Anna Gibson at 8:18:00 PM