Inspired Tuesday: a day to share anything and everything inspired by Marie Antoinette and her world. 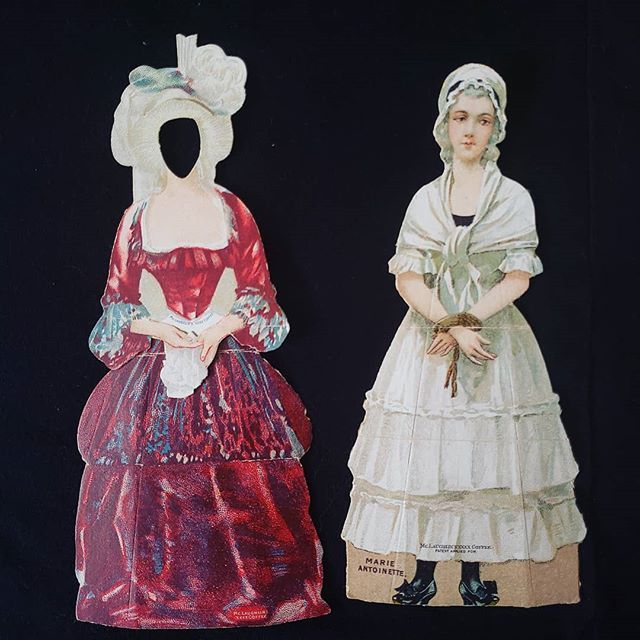 [image: my photograph/collection]
It's not often you take off the gown of a paper doll to see someone hands bound for execution, yet this unique remnant of the vast paper doll trade from the later half of the 19th century is one such example.

McLaughlin Coffee's paper dolls and sets were, at their core, advertisements for the company packaged in a child and trading card collector friendly package. Over the years, McLaughlin Coffee produced hundreds of different paper doll ephemera for their customers, young and old alike. These included paper dolls of fashionable modern women, as well as dolls with clever gimmicks such as paper dolls of young children with illustrated backs that reveal a hidden surprise: stolen candy!

Among the more historical of their paper doll  advertisements was a series called The Queens, which featured 8 different dolls ranging from Isabella of Spain to Mary Queen of Scots to, of course, Marie Antoinette. Each doll included an additional outfit as well as an accessory, which did not come with the auction I purchased.

This particular paper doll was actually meant to be folded into a sitting position, hence the somewhat awkward proportions on her red gown. I won't be attempting to sit her down so as to avoid further creasing, but one can easily imagine the first owner of this this doll in the 1890s eagerly pressing down the paper folds of her new treasure just-so in order to sit her on the edge of bedroom desk, pretending it was--where else--a gilded chair at Versailles.
Posted by Anna Gibson at 3:24:00 PM