Review: A Day at Château de Fontainebleau by Guillaume Picon 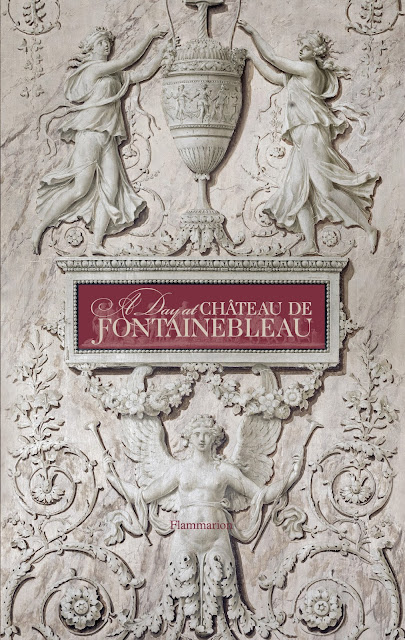 A Day at the Château de Fontainebleau is a fascinating illustrated guide to the château de Fontainebleau, one of the most well-preserved, historically rich châteaus in the whole of France. It boasts more than 1,500 rooms and currently welcomes more than 500,000 visitors every year; visitors can enjoy not only the rich historical rooms of the château but its expansive and elegant gardens as well.

Fontainebleau is more than just a lavish palace: it is a historical site which Napoleon himself once described Fontainebleau as having "the shape and color of time." His poetic description is apt: eight centuries of history have passed through these highly decorative walls, which have housed everything from Renaissance kings to political prisoners to emperors and so much more. The early history of the palace is somewhat unclear, but during the reign of Francois I, the palace was transformed from just 'another' royal residence to a true cultural landmark. Francois I was a significant patron of the arts and this showed in the attention he lavished on Fontainebleau.

Despite several periods of stagnation due to war and economic troubles, Fontainebleau continued to be developed and cultivated by the French kings and their royal families. In 1665, Pierre de Bourdeille wrote regarding Henri IV's massive refurbishment of the palace: "Our great king Henri IV has since decorated and enriched this residence a hundred times better, so that it is now changed beyond recognition from its former state ... in short, a little paradise in France." Under the regency of Anne of Austria, even more lavish projects were undertaken at the château; the furnishings in her personal bedchamber, for example, were all hung with real cloth of cold, while her chairs were upholstered in cloth of gold embellished with silver flowers. 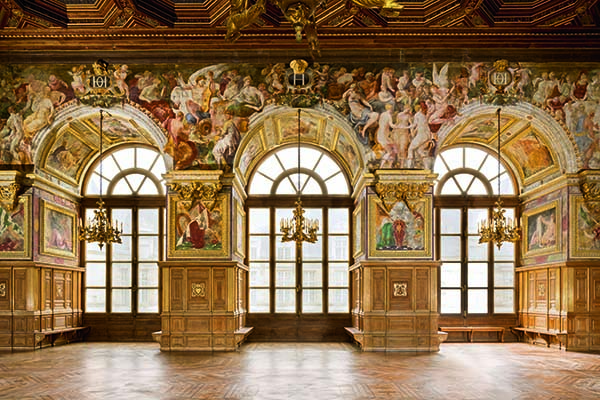 [©Eric Sander, from A Day at Château de Fontainebleau (Flammarion, 2015)]
Begun under François I, the loggia was converted into a ballroom by Henri II. The frescoes were painted between 1550 and 1558 by Niccolò dell’Abbate and his team, after drawings by Primaticcio.

But not every king was able to successfully complete their plans for Fontainebleau. Louis XV had a "grand design" for the palace, which would involve completely overhauling the entire château. However, the Seven Years War ensured that his "grand design" would be unfinished. He did manage to create a series of well loved, smaller royal apartments on the ground floor (which no longer survive today) and new wing built by Jacques and Ange-Jacques Gabriel---though this new wing, sadly, required the destruction of the masterpiece Ulysses Gallery built for Henri II. 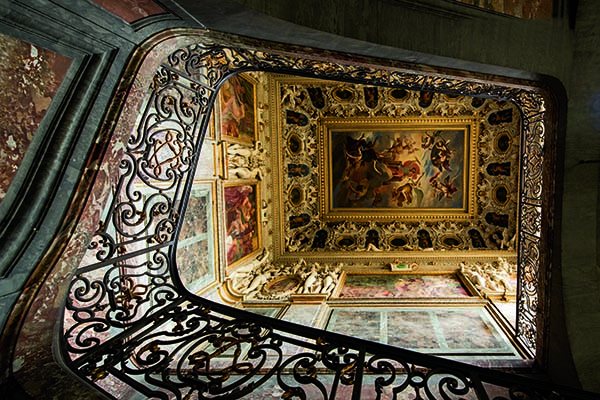 [©Eric Sander, from A Day at Château de Fontainebleau (Flammarion, 2015).]
Looking up to the ceiling of the King’s Staircase, built during the reign of Louis XV in the former bedchamber of the Duchesse d’Étampes, mistress to François I. The wall decorations date from the  Renaissance. The ceiling painting of the Apotheosis of Alexander the Great was carried out under Louis-Philippe by Abel de Pujol.

Under the reign of Louis XVI, two special apartments were added for Marie Antoinette: a Turkish boudoir and, directly below it, the Boudoir de la Reine. These boudoirs were designed as private areas for the queen, who wanted somewhere she could withdraw from the public court at Fontiainebleau. But the Bourbon presence at Fontainebleau did not last through the 18th century. Although the palace and many of its decorations remained remarkably intact, personal objects and royal furniture were requisitioned by the revolutionary government. Some of the items were sold at auction (which, incidentally, is how this commode from the apartment of Louis XVI at Fontainebleau ended up in Detroit, Michigan!) while others were stored away. 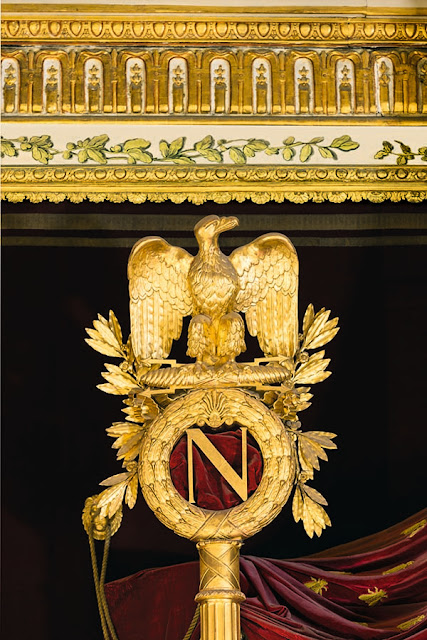 [©Eric Sander, from A Day at Château de Fontainebleau (Flammarion, 2015).]
Perched on a laurel wreath, one of the imperial eagles in the Throne Room clutches Zeus’s thunderbolt in its claws. The fabric draping the dais is embroidered with bees, the symbol that replaced the royal fleur-de-lis.

The rise of Napoleon occasioned another chapter in Fontainebleau's history, albeit not a dramatic one. Napoleon re-purposed some of the palace's rooms (the bedchamber of Louis XVI became Napoleon's throne room, while one of Marie Antoinette's boudoirs became Empress Josephine's bedchamber for a time) but did not engage in any major restorations or building projects. Some vestiges of Napoleon's reign can still be found in the palace, such as this imperial "N" in the throne room.

Likewise, the returning Bourbons did not pay much attention to Fontainebleau outside of some minor restorative work and the addition of more Bourbon-minded artwork and sculptures, which were designed to be a symbol of the return of a Bourbon presence in France. Finally, during the reign of Louis-Philippe, the palace underwent significant restorations--though critics of Louis-Philippe noted that the restorations were not always in the spirit of the palace's historical significant. Without Louis-Philippe's restorations, however, much of Fontainebleau's historical rooms and architecture would surely have decayed beyond repair in just a few short decades. The palace required further restorations in the early 20th century, which were funded by John D. Rockefeller, who also funded major restorations at Versailles.

Fontainebleau, when compared to other French royal residences such as Versailles, is relatively unrepresented in the publishing world.  In fact, this book is one of the few books on the palace to be published in English in the last few decades! That is one of the reasons A Day at the Château de Fontainebleau is an important addition to the recent 'Day' books published by Flammarion. It provides a knowledgeable, insightful look at the history, development, decay and eventual restoration of this culturally significant French royal palace; the second section of the book covers the pleasures of the palace, including the lavish entertainments and hunting parties that were once held there. The text is supplemented by quotes from contemporaries who visited the palace and admired its wonders first hand. The book contains 170 crystal clear color photographs, highlighting some of the most exquisite rooms, paintings, sculptures and even intricate details that showcase why Fontainebleau is such a historical treasure.

I highly recommend A Day at the Château de Fontainebleau for anyone with an interest in French history, French architecture, and historical buildings.

[I was provided a review copy by the publisher.]