Deepest Expectations: An Allegory of the Death of Louis XV

Louis XV had once been called the "Most Beloved," but by the time of his death in 1774, he had squandered the good will of the people with years of unpopular decisions, increasing isolation from anyone outside his court circle, and visible, expensive mistresses who made convenient scapegoats for the king's decisions. His death ushered in a wave of hopes, pressure and expectations from the French people for their new king, the young Louis-Auguste, now Louis XVI, and his young queen. 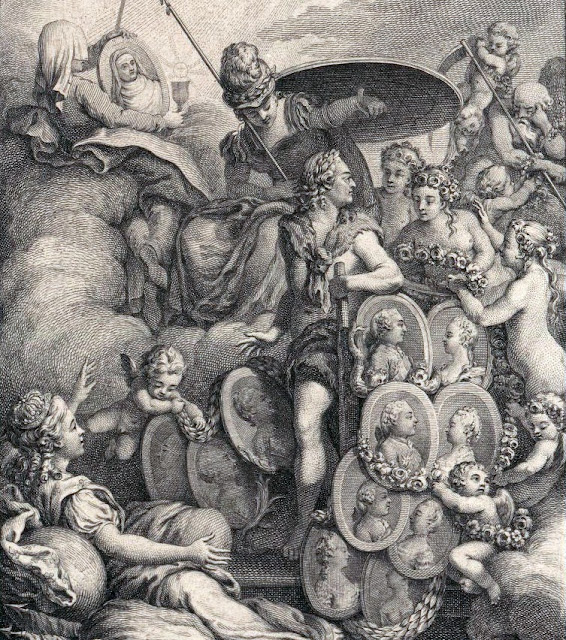 Perhaps nothing illustrations the immediacy of these expectations than this engraving published in 1774 as 'An Allegory of the Death of Louis XV.' Rather than resembling the standard allegory of the death of royalty--which usually depict them being welcomed into heaven by angels, cherubs and other heavenly creatures--Louis XV is shown in barefoot, in simple clothing with a traveler's walking stick; he is being shown portraits of his living family, the hope for France. It is his remaining family, and not Louis XV himself, who are being draped with flower garlands and celebrated.

To illustrate the point even further, this engraving was accompanied by the following poem, which refers to Louis XV as 'the subject of regret.'


What an important spectacle this tableau presents you!
An august family still flourishing
Contemplate here these portraits
See--there, gathered under the eyes of France
Along with the subject of regret
Those of its deepest expectation

Marie Antoinette remarked on these expectations in a letter to her mother several months after the death of her 'grandpapa king': "... I worry a little about this French enthusiasm when it comes to the future. ... opinion is divided, and it will be impossible to please everyone in a country where people are so impatient that they want everything done immediately."

Louis XV left his grandson a kingdom that was in near ruins from deficit and deeply ingrained corruption. Louis XVI, woefully unprepared to rule and forced to navigate the corrupted court that detested his attempts at reform, was faced with the impossible task of fixing France.
Posted by Anna Gibson at 12:35:00 AM