Although she is often overlooked in popular culture, Madame Elisabeth played an integral role in the lives of Louis XVI and his family--particularly during those final years in captivity. Her religious devotion was a source of strength not just for herself, but for her brother, her sister-in-law, and their children. Madame Royale wrote that once she was old enough to appreciate such things, she saw nothing in her aunt but "religion, love of God, horror of sin, gentleness, piety, modesty, and a great attachment to her family, for whom she sacrificed her life[.]"

I recently received several religious items related to the unfortunate princess, which I'd like to share now.

Below is a scan of a beautiful prayer card featuring one of the most well known prayers of Madame Elisabeth, presented in an elegant font and surrounded by religious and royal imagery. 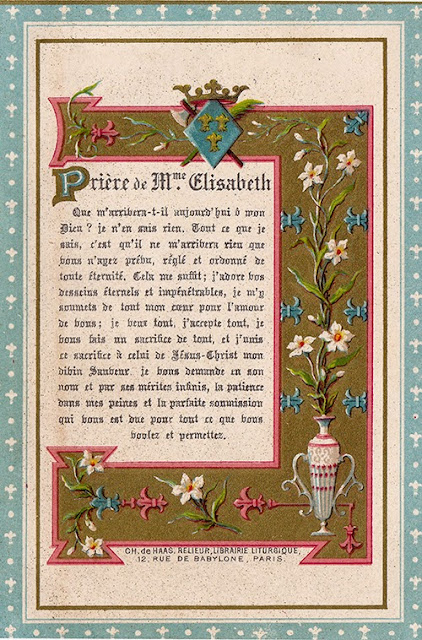 The second item is a small booklet, released sometime in the 1920s, featuring a small portrait on the front, a short biography of the princess along with a few religious quotes from her letters on the inside (not pictured); and the same prayer quoted above on the back. 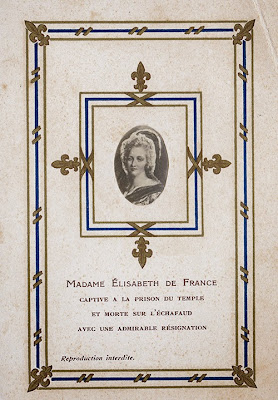 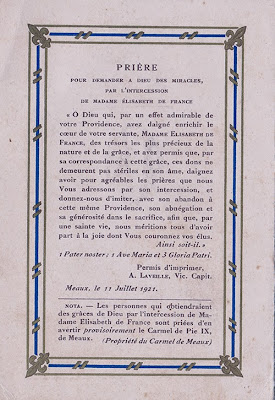 There's a particularly interesting note at the bottom of the page: "People who obtain graces of God through the intercession of Madame Elisabeth are requested to provisionally notify the Carmel de Pie IX of Meaux."

The Carmelites of Meaux were the first known association to campaign for the beatification of Madame Elisabeth. Princess Henriette of Belgium was the most famous patron in their cause. There have actually been several movements to petition the Church to beatify Elisabeth since the 1920s, including a modern Association of Madame Elisabeth founded in 2008; so far, none of these efforts have been successful. 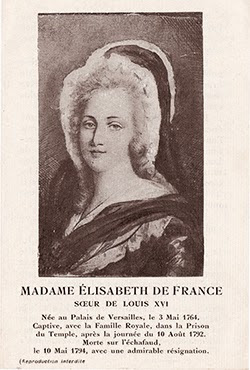 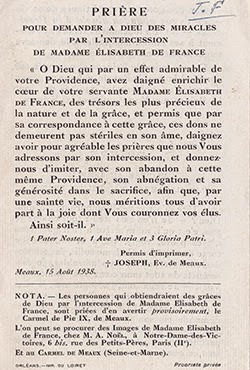 The final item I received is nearly identical to the earlier booklet, except it is from the late 1930s or early 1940s and is much more simple. The interior pages (not pictured) contains a short biography and the back, like the earlier release, has a transcription of Elisabeth's prayer.

And finally, an English translation of the prayer featured on all three of these publications:


I do not know what will happen to me today, o my God. All I know is that nothing will happen to me but what You have foreseen from Eternity. That is sufficient, o my God, to keep me in peace. I adore Your infinite designs. I submit to them with all of my heart. I desire them all: I accept them all. I make the sacrifice to You of everything. I unite this sacrifice to that of your dear Son my Saviour, begging You by His Sacred Heart and by His infinite merits for the patience in my troubles and the perfect submission which is due to You in all that You wish and permit.