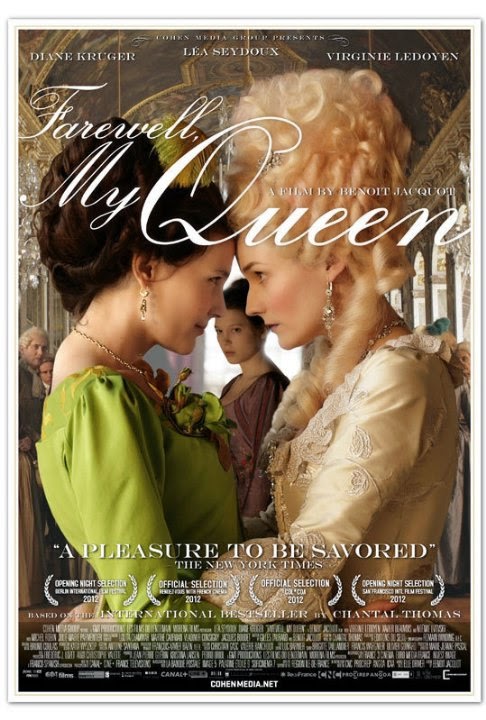 Benoît Jacquot's Farewell, My Queen (French title: Les Adieux à la reine) is based on a historical fiction novel of the same name by Chantal Thomas. Both the book and the film follow the isolated, insular life of Sidonie (Agathe-Sidonie in the book) Laborde, an official reader to Marie Antoinette. Sidonie, along with the rest of the inhabitants of Versailles, finds herself swept up in the chaos during the fall of the Bastille.

And while the book and the film follow the same basic plot, the film adaptation of Farewell, My Queen gives a vastly different impression of of the events (and the people) involved in the story than its source material.

One of the more significant deviations that the film takes from the book is its portrayal of Marie Antoinette. Diane Kruger's Marie Antoinette is mercurial--at times exceedingly sweet and kind and, at others, exceedingly cruel. Half of her scenes make you wonder why Sidonie is so unbelievably devoted to the queen, much less (as the film implies) possibly romantically in love with her. To me, it is such a shame because Kruger does give a fine performance with the material she was given, but the decision to have Antoinette swing between the 'gentle kindness' described in the book and a haughty cruelness was not, in my opinion, a wise one.

Not only does it make her a rather unlikeable character, it dramatically shifts her relationships with all of the other characters, giving them a more embittered flavor than they ever had in the book. It is easy to understand why Sidonie is so devoted to Marie Antoinette in the book. In the film, you are left wondering why Sidonie would ever rejoice at the thought of spending even a moment with her.

Nowhere is this change in the queen's personality more apparent than in the scene where she asks Sidonie to disguise herself as the duchesse de Polignac in order for her companion to safely flee France. In the film, the scene is a harrowing climax on Sidonie's love for Marie Antoinette. The queen thinks nothing of using Sidonie as bait to save her friend and bristles when Sidonie puts up resistance to the idea, even going so far as to say Sidonie should show "no arrogance" because she is being allowed to earn the queen's love through this action.

It is the ultimate power struggle, one that Sidonie cannot hope to win, regardless of any perceived relationship she had with the queen. She is then casually stripped of her clothes in front of Marie Antoinette, in a painfully vulnerable moment that may be a nod to a scene earlier in the film, where Sidonie pulled down the covers to stare at the naked, sleeping duchesse de Polignac. Marie Antoinette kisses the disguised Sidonie, a kiss meant for the duchesse de Polignac, in a cruel twist of Sidonie's own feelings for the queen.

In the book, however, there is no cruel confrontation between Sidonie and the Queen. The Queen lays out her request, and Sidonie accepts. She remarks later that she was 'pulled in two directions' and that she could have evaded the order, but she felt 'carried along ... by passions that were foreign to me.' She is upset at the idea of leaving behind Versailles and the queen, but there is no sense of the cruelness or betrayal as there is in the film. And, in the book, it is Gabrielle de Polignac, not Sidonie, who is stripped of her clothing--this time by Marie Antoinette herself, who dresses Gabrielle in the peasant disguise for her journey.

The difference between these two scenes might lie in the film's decision to drastically lower Sidonie's age and, consequently, completely change her relationship with the queen. In the book, Sidonie is in her late 30s or early 40s, just a few years older than the queen. She plays a part similar to Madame Campan: an older woman with great loyalty to a queen who has earned that devotion through kindness and gentleness. In the film, however, Sidonie appears to be in her early or mid 20s and her relationship with the queen is more like a girlish infatuation or crush than anything else.

To the older book Sidonie, Marie Antoinette's request is not seen as a betrayal but more a natural part of the relationship between a queen and a loyal servant--she is upset, not because she feels betrayed, but because she is leaving the carefully crafted world of Versailles, at the center of which was Marie Antoinette, behind. The film Sidonie, by contrast, seems personally hurt by the queen's request, which is a reflection of the altered dynamics of their relationship in the film version.

The portrayal of the duchesse de Polignac in the film is another strange departure from the novel. Polignac is not portrayed as an angel by any means in the book, but it is, as with Marie Antoinette, at least easy to understand why the queen is taken with her.

In the film, she is cold, sharp and calculating. It's far more natural to side with her enemies in the film due to her distant and off-putting personality. In the book, however, Gabrielle described as having softness, sweetness and a gentle temperament that suited the queen well. The green dress that she wears has no symbolism in the film--yet in the novel she wears it because she knows it will lift the queen's spirits, due to the fact that everyone else is wearing the prescribed dark mourning fashions for the queen's son, Louis Joseph, as prescribed by etiquette.

Her gentle disposition makes her betrayal in the novel, where she calmly recites everything (down to the last bill) that she will need in order to flee France, all the more effective. And when Gabrielle mutely cries at the end of the book, realizing the depth of her actions as Sidonie reads her a note from the queen, it packs a punch that sits at the bottom of your stomach. At the end of the film, Gabrielle is concerned only with keeping Sidonie in line as they flee the country, with not a hint of sadness or regret for her actions.

Why such a change? Perhaps the director wanted to contrast the harsh, sharp Gabrielle with the soft youth of Sidonie, especially given the presence of a scene where Marie Antoinette, who is almost gushing over her feelings for Gabrielle, compliments the enraptured Sidonie's youth.

That is not to say that the film does not have merits. The film, like the book, is not afraid to tackle the side of Versailles that is often swept aside in favor of bubbling fountains and gilded walls: the less sparkling, gritty reality of living in a palace with hundreds of people, pets, and--of course--the pests that naturally follow. There is a delightfully terrible moment early on in the film when Sidonie is teased with a rat by another servant living in the palace. The presence of the dead rat, sweaty, anxious courtiers packed into hallways, and mosquito bites that litter Sidonie's arms are just some of the many ways that Jacquot shows the grittier side of Versailles.

Another aspect of the book that the film tackles well is the sense of impending apocalypse that creeps through Versailles as the news of the Bastille makes its way through the palace. The film builds up the unnatural tension slowly; there is a brief moment early on in the film when Sidonie is running towards the Petit Trianon chateau. She (as she so often does in this film) slips and falls. She turns around and looks at the two guards who are standing at the gate. Neither so much as looks at her. Later on, two stewards can be seen discussing a minor rebellion: not announcing a marquis when he entered a room. In that same scene, one of Sidonie's contemporaries is handed a small chunk of hard bread for breakfast; the woman at the table remarks, "You call this bread?" and the servant fires back: "Some people make this last a week."

A scene later on in the film when the inhabitants of Versailles reach the pinnacle of panic is also worth mentioning: as courtiers flee the palace in droves, one woman commits suicide in despair and we see a brief but chilling glimpse of her body being cut down. The film rather wisely decided to not include the book's physical manifestation of "Panic," which the book portrays as a deranged woman wreaking havoc on the palace grounds. Instead, it replaced her appearances with some somber, yet shocking, realities of fear.

Another aspect of the film that I enjoyed was the inclusion of new scenes between Louis XVI and Marie Antoinette, which although brief, are a highlight of the film due to their tenderness. The book did not dwell too long on Louis XVI, largely because Sidonie did not have much interaction with the king, but the film includes several scenes that reflect the tender relationship between the king and queen. Of particular note is the moving scene where she has Sidonie read the beginning of her speech to the people of Paris, in case the king should be kidnapped or harmed, which was quoted from a speech the real Marie Antoinette wrote. Kruger's performance really shines here, as it does in other moments in the film where she is allowed to portray the magnetic Marie Antoinette described in the novel.

I won't say that I hate the film, or even dislike it--I actually do enjoy it... for what it is. My misgivings are more about the fact that it is not a good adaptation of the original novel, and the changes made alter the core of the story penned by Chantal Thomas. The novel is a rich, lush look at the crumbling decay of the strict and unnatural world of Versailles, which sparks with life and fear and panic at the intrusion of the world outside the palace. The book tackles the dying days of Versailles in a realistic way that, at times, reads like an actual memoir. The film, however, ignores much of the outside context of the story and focuses much more heavily on an even more isolated viewpoint for Sidonie (since, unlike the book, the film is not told in retrospect) and the newly crafted relationship triangle between a younger Sidonie, a Marie Antoinette with split personalities, and a cold Gabrielle de Polignac, and the resulting power struggles, infatuations and betrayals that bounce between them.