'That was the sole moment when her firmness abandoned her.' 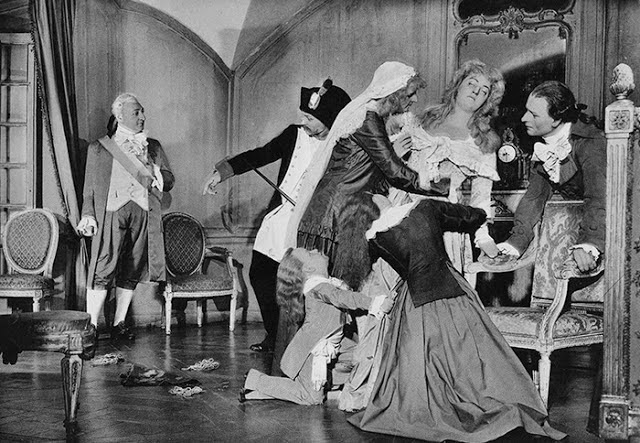 image: A wax tableau of the royal family hearing the news of the murder of the princesse de Lamballe
source: my scan/collection

From the account of Marie Thérèse Charlotte, duchesse d'Angouleme, on the dreadful day of September 3rd, 1792:

At three in the afternoon we heard dreadful outcries; my father left the dinner-table and played backgammon with my mother, to control his countenance and be able to say a few words to her without being heard. The municipal guard in the room behaved well; he closed the door and window, also the curtains, so that they might see nothing. The workmen at the Temple and the jailer Rocher joined the murderers, which increased the noise. Several officers of the National Guard and some municipals arrived; the first desired that my father should show himself at the window. The municipals fortunately opposed this; but my father, having asked what was happening, a young officer replied: "Well, if you want to know, it is the head of Mme. de Lamballe they wish to show you."

My mother was seized with horror; that was the sole moment when her firmness abandoned her. The municipals scolded the officer, but my father, with his usual kindness, excused him, saying it was not the officer's fault, but his own for having questioned him. The noise lasted till five o'clock.

The tumult was hardly over before Pétion, instead of exerting himself to stop the massacre, coldly sent his secretary to my father to reckon about money. This man was very ridiculous, and said many things which would have made us laugh at another moment; he thought my mother remained standing on his account; for since that awful scene she had continued standing, motionless, and seeing nothing that took place in the room. The municipal guard who had sacrificed his scarf at the door made my father pay for it. My aunt and I heard the générale beaten all night; my unhappy mother did not even try to sleep; we listened to her sobs.