An excerpt from the Last Testament of Louis XVI 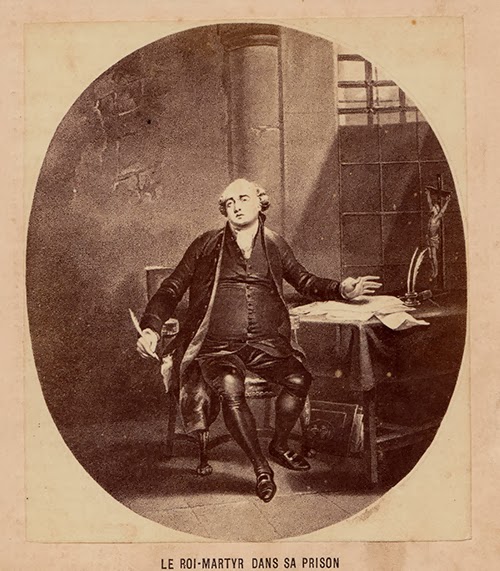 The last testament of Louis XVI, had been separated from his family, was penned on December 25th, 1792, the day before he was due to appear before the Convention in his Defense. The full document touches on many issues central to the king's life--such as his religious faith, his forgiveness of his enemies, his care for those who had served him faithfully, and his love and advice for his family. The following excerpt was addressed to his wife, his sister, and his children:


"I commend to God my wife and my children, my sister, my aunts, my brothers, and all those who are attached to me by ties of blood or by whatever other means. I pray God particularly to cast eyes of compassion upon my wife, my children, and my sister, who suffered with me for so long a time, to sustain them with His mercy if they shall lose me, and as long as they remain in his mortal world.

I commend my children to my wife; I have never doubted her maternal tenderness for them. I enjoin her above all to make them good Christians and honest individuals; to make them view the grandeurs of this world (if they are condemned to experience them) as very dangerous and transient goods, and turn their attention towards the one solid and enduring glory, eternity. I beseech my sister to kindly continue her tenderness for my children and to take the place of a mother, should they have the misfortune of losing theirs.

I beg my wife to forgive all the pain which she suffered for me, and the sorrows which I may have caused her in the course of our union; and she may feel sure that I hold nothing against her, if she has anything with which to reproach herself.

I most warmly enjoin my children that, after what they owe to God, which should come first, they should remain forever united among themselves, submissive and obedient to their mother, and grateful for all the care and trouble which she has taken with them, as well as in memory of me. I beg them to regard my sister as their second mother.

I exhort my son, should he have the misfortune of becoming king, to remember he owes himself wholly to the happiness of his fellow citizens; that he should forget all hates and all grudges, particularly those connected with the misfortunes and sorrows which I am experiencing; that he can make the people happy only by ruling according to laws: but at the same time to remember that a king cannot make himself respected and do the good that is in his heart unless he has the necessary authority, and that otherwise, being tangled up in his activities and not inspiring respect, he is more harmful than useful."