Review: The Time-Traveling Fashionista at the Palace of Marie-Antoinette by Bianca Turetsky 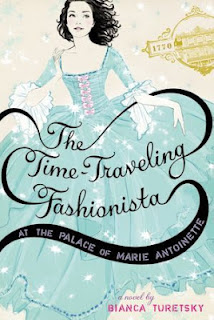 Bianca Turetsky's Time-Traveling Fashionista series follows the adventures of a young Louise Lambert, who is obsessed with vintage fashion and finds herself invited to exclusive, and not-so-ordinary vintage fashion sales run a pair of mysterious vintage-adoring ladies who perfectly understand Louise's passion for older fashion styles. In this second novel in the series, The Time-Traveling Fashionista at the Palace of Marie Antoinette, Louise finds herself sent back to the court of 18th century Versailles after trying on a very vintage, authentic Rose Bertin gown. Once there, she finds herself in the body of the beautiful duchesse de Polignac as she mingles with famous figures who were once just names mentioned in French class—the lovely princesse de Lamballe, the awkward Louis XVI, and the infamously doomed Marie Antoinette. But Louise’s field trip in the past isn’t all silks and roses—in addition to witnessing firsthand the harsher side of life in the 18th century, Louise suspects that someone there may know that “the duchesse de Polignac” isn’t who she really seems! And when her time-teleporting Rose Bertin gown goes missing, Louise fears that she may be trapped in a world that she knows will come crashing down.

Like the first novel in the series, The Time-Traveling Fashionista At the Palace of Marie Antoinette is written in a light and casual style which is perfectly suited for middle grade readers. And also like the first novel, the premise is a fun and entertaining one that should spark the interest of young and older readers alike. Younger readers who are partial to history and fashion will definitely get a kick out of the premise and hopefully the setting as well. There were some historical inaccuracies in the book, such as a confused historical timeline and the use of "Let them eat cake," but Turetsky did capture the atmosphere of the court of Versailles well. I was pleasantly surprised by a special twist in the story--I won't spoil it!--which sets the foundation for some interesting "Time-Traveling Fashionista" adventures in the future. The illustrations by Sandra Suy, which were a big hit with the first book in the series, do not disappoint in this second novel. If you haven't seen Sandra Suy's illustrations before, check out the book and take a peek! They are absolutely stunning and compliment Turetsky's text very well.