Review: Marie Antoinette and the Decline of the French Monarchy by Nancy Lotz 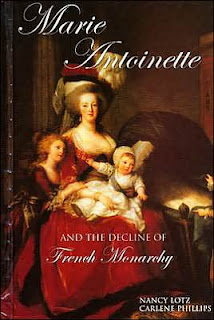 One of the things I am always on the lookout for is a great non-fiction book about Marie Antoinette for younger readers.  Many of the published books written for the younger age groups are older and quite dated, often portraying Marie Antoinette as a glitzy cuckold with a love of diamonds and a penchant for affairs or as a callous monarch who makes quips about cake. In this respect, Lotz does her subject justice by avoiding most of the sensationalized traps about Marie Antoinette that were popular in previous decades. She does a fair job of presenting both the human and political side of Marie Antoinette, which creates a rounded picture of a queen--neither a saint or sinner.

The writing is adequate for most of the book, although there were several noticable typos and historical mistakes that should have been caught by an editor--such as the changing number of children that Maria Theresa had. The editing is also rather choppy and the book frequently switches topics with little or no transition at all, which I would not expect in a book aimed at younger readers. And while the book does serve as a passable youth biography, I felt that the author didn't properly tackle the subject of the fall of the French monarchy in a larger context very well. For example, Lotz spent several pages in the beginning of the book discussing Maria Theresa and the politics behind the engagement between Marie-Antoinette and Louis-Auguste. However, only two paragraphs in all were used to describe the planning of the royal family's flight to Montmedy, the actual flight, their return from Paris and the political ramifications of the flight. I expected much more emphasis on the events within the revolution which caused the decline of the monarchy (politically and in the eyes of the French) due to the book's proposed subject.

I would recommend Marie Antoinette and the Decline of the French Monarchy by Nancy Lotz for younger readers to perhaps get a feel of a weightier book about Marie Antoinette and the revolution before they are ready for something lengthy. However, I think older readers looking for insight would be better served by reading one of the sources Lotz lists in her bibliography.
Posted by Anna Gibson at 3:08:00 PM