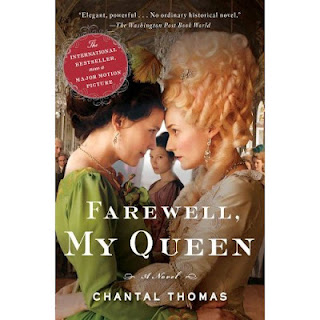 [A review copy of this edition was provided to me by the publisher upon my request.]

Chantal Thomas' novel Farewell, My Queen has been getting a lot of buzz this year because of its recent film adaptation of the same name, and because I received several emails requesting a review of the book--in particular, the movie tie-in edition, I decided to revisit the novel in a new review.

For those unfamiliar with the basic premise of the novel, which is written in the style of a memoir: Agathe-Sidonie Laborde is a reader to Queen Marie-Antoinette who, living in exile with fellow Frenchmen in 1811, revisits the three days which saw the collapse of the isolated world of Versailles: July 14th, 15th and 16th--1789. In three short days, Laborde witnessed events which marked the end of Versailles, the downfall of the ancien regime, and the end of a world for countless royals, nobles, courtiers and servants--including herself.

This dramatic collapse is shown through lush and vivid detail by Thomas, whose eye for detail about the ancien regime is perfectly suited to a memoir-style narrative. Although readers expecting a quick romp through Versailles might find such incredible detail tedious, they are pure heaven to readers looking for a narrative that pulls them back into the past. Readers will have no trouble imagining the tranquility of the queen's bedroom at the Petit Trianon, the stifled (and smelly) rooms of Versailles filled with gossiping nobles awaiting news of the Bastille, or the chaos as servants abandon their masters and couriters cling to dresses, chairs and jewelry while fleeing the gilded palace.

I highly recommend Farewell, My Queen by Chantal Thomas to anyone interested in Marie Antoinette or the 18th century. In regards to this specific edition, the cover features a gorgeous promotional still from the film and is well printed--I know a few Paperback editions of the novel suffered occasionally from some printing errors, but there are none to be found in this new Touchstone edition. Regardless of which edition you purchase, I'm sure that you will enjoy this luscious novel.
Posted by Anna Gibson at 5:58:00 PM