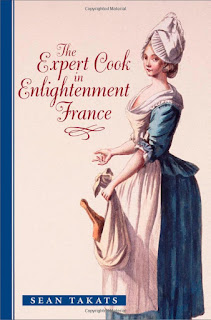 [I was given a review copy of this book by the publisher upon my request.]
The Expert Cook in Enlightenment France by Sean Takats fills a much needed gap in 18th century studies by exploring the history of cooks in 18th century France. There has been much written about French food and cooking methods during this period, but precious little has been published about the people behind the food. Takats places the French cook back into the spotlight, providing a concise and informative overview on cooks, their work, their precarious role in society and how they hoped to strengthen that role through cooking during the Enlightenment.

Cooks, as Takats explains, held a unique place in 18th century society. Both men and women worked as  cooks, and unlike other occupations which were primarily male or female, cooking was seen as neither masculine or feminine.  The occupation of a cook was not entirely domestic, like a house servant, or entirely professional, like an architect. This in-between occupation created a greater degree of autonomy and freedom for cooks when it came to looking for employment. They often bargained with employers for wages and other benefits, and had much more freedom when working in the home than a typical domestic house servant. Cooks also published cookbooks, recipes and other instruction manuals, which was not common outside of 'behavior' manuals written with domestic servants in mind.

However, their role in society was at times contradictory. Although employers gave cooks much freer 'reign' than a typical house servant, cooks were greatly mistrusted. Satirical prints and stories about dirty, evil, and sexually promiscuous cooks abounded in 18th century France. Cooks intended to improve their status by reforming methods of cooking, recipes, and the kitchen itself, however these reforms only inspired greater suspicion of cooks and cooking. When 'modern cuisine' was developed, it was intended to showcase the power that cooking and food could have on the body and establish cooking as a legitimate science. These attempts to establish the importance of cooking only caused greater problems - after all, reason followed that if food could be used to improve health, it could cause destruction and death as well. The poor reputation of cooks at the time only helped to strengthen the stereotype of the cook as a dangerous, secretive person. Unfortunately, efforts by cooks to improve their reputation in society generally fueled the suspicion and derision he general populace held for them. However, despite this setback, cooks played an important role with 18th century society and used the Enlightenment to help pave the way for French cooking as we know it today.

It is a slimmer book - about 145 pages of text - but it provides a good overview of the role of cooks during this period and Takats' writing is academic but accessible enough for the general reader to enjoy. It was a surprising read for me, as I hadn't thought about cooks during this time period as anything other than a typical servant. It was enlightening to read about their unique position, and the surprising poor reputation that cooks had in society. I definitely recommend it for 18th century libraries, French studies libraries, and anyone particularly interested in the role of cooks during the 18th century.
Posted by Anna Gibson at 6:55:00 PM