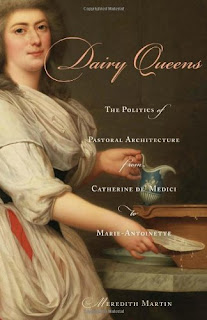 [I was provided a review copy of this book upon my request by Harvard University Press.]

Meredith Martin delves into more than two centuries of French history in her book Dairy Queens: The Politics of Pastoral Architecture from Catherine de Medici to Marie Antoinette, which seeks to place the French pleasure dairy back in its historical context, shattering the myths and assumptions about the role of pleasure dairies in elite society.

The assumption that pleasure dairies were built by royal women as a way to pretend at being peasants while not actually living like one has permeated books, films and pop culture for years. Marie Antoinette is still accused of pretending to be a peasant while drinking dairy from porcelain cups and milking perfumed cows -- a true example of a "Let them eat cake" (which no, she never said) state of mind. However, Martin puts the pleasure dairy of Marie Antoinette (along with several other prominent French women such as Madame de Pompadour and Catherine de Medici) in their historical context, dismissing the notion that the dairies were there for the frivolous play of the elite class.

Martin explores the political, social and gender politics behind the pleasure dairies, revealing a surprising role in the lives of the women or men who built and enjoyed them. Pleasure dairies were often ways for aristocratic or royal women to exercise a form of political power, while still working within their gender role by promoting their status as nurturing mothers and worthy estate managers. They were also a way to improve health, employing Rosseau's notion that aristocratic women should retreat to countryside estates and reap the benefits of fresh milk and air. The catch, of course, is that most pleasure dairies were not built in the true countryside but on the outskirts or even within cities, so that a woman could enjoy the benefits of the countryside without giving up her social obligations. However, the female influence on the pleasure dairy was, particularly by the 1780s, often criticized and made suspect. When the dairy at Rambouillet was built in 1787 (without input from Marie Antoinette) it was a noticeably different from her own dairy at the Trianon. Martin believes this was an intentional move by the male designer to, in a way, put Marie Antoinette back in her place. Marie Antoinette may have been the "goddess" at her Trianon, but not so at the 'male' dairy at Rambouillet.

In addition to discussing the historical role of the pleasure dairy from the 17th century through the French Revolution, Martin touches on the impact the pleasure dairy - and its political and gender ramifications - have had on modern society.

Martin's writing is clear, intelligently written and supplemented by many photographs, drawings and paintings. It's worth a mention here that the layout of this book is absolutely wonderful. I'll admit I was expecting a "dry" layout from a University press, but when I opened the book I was pleasantly surprised at the amount of images used. It's really a superb layout, and something that not only compliments Martin's writing but makes the book something worth looking through even after you've finished reading.

Overall, I definitely recommended this book to anyone interested in French history, especially Marie Antoinette and her much maligned pleasure dairy. It's an excellent addition to any library and I think most readers will find the insights about the often ignored pleasure diary interesting. The book was released earlier this year and is available at most online bookstores.
Posted by Anna Gibson at 4:22:00 PM