Some thoughts on the subject of historical fiction and accuracy 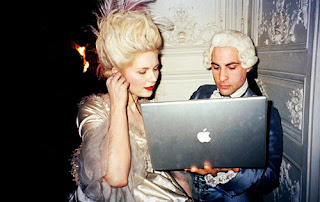 The topic of historical accuracy is no stranger to those of us that adore historical fiction, and accuracy takes on an entirely new dimension when a book deals with actual events and actual people. After all, it's one thing to write a story about the escapades of a fictional 16th century noblewoman kidnapped by bandits, and quite another to pen a fictional diary from the perspective of Anne Boleyn-- or Marie Antoinette. A real person's life, real events, real stories... all have certain established timelines and facts. A fictional noblewoman can have a life that is entirely invented by the author's imagination, but Marie Antoinette was married to Louis-Auguste, came to France in 1770 and lived at Versailles.

An important distinction when talking about historical accuracy in fiction is the difference between a "lie" and a "mistake." For this, I turn to an excellent explanation from guardian.co.uk:

"In describing the interactions of real individuals, one has to invent reactions or the character is just two-dimensional, and never develops. In creating good historical fiction, it is essential to tell lies. A clear distinction needs to be made here between telling lies and making mistakes. A lie is intentional and purposeful; a mistake is accidental ... "

A mistake, then, would be saying that Louis XVI is the son of Louis XV. Mistakes are typically the result of (a lack of) research, from receiving misinformation, or simply something not caught by an editor.

A lie would be sending Marie Antoinette off on an adventure in Paris as the Bastille is falling, or creating a conversation between Louis XVI and Marie Antoinette about a particularly lovely blue sky. These fictional events are intentionally written, and not accidental on the part of the author. Lies are typically invented because the author wants to make the narrative flow more smoothly, add more dimension to the characters, or explore something new.

The line between lies and mistakes can sometimes be murky. For example, if an author omits Sophie, the last born of Marie Antoinette's children, is it a mistake resulting from poor research, or an intentional lie intended to improve their story? This is one reason I appreciate author's notes that discuss the accuracy of a book, because I feel it helps the reader get a better idea of why certain inaccuracies are in the book - even if, in the end, the reader does not feel the inaccuracies are acceptable or justified.

And when is inaccuracy justified? As cliche as it sounds, it's what can be concluded from reading countless discussions about the subject: "It just depends." There is no right or wrong answer. It truly just depends on the reader's personal preferences. I know some readers who wouldn't mind if Marie Antoinette was written as a Paris Hilton clone who chewed bubble gum and stuck it under her cows at the Trianon, as long as they liked the story. I know some readers who don't bat an eye if Marie Antoinette is sporting foot-high hairdos in 1791. And I know some readers who would find all of the above unacceptable, no matter what.

Personally, when I read fiction about Marie Antoinette, her family, or other real people involved in the French Revolution... I want to read about those people and those events. By this, I mean that I don't want to read about a character who bears no resemblance to (what we know of) Marie Antoinette except for her name. I want to feel that the interpretation of her character is based in history, and not just based on whatever the author felt like at the time. I enjoy the MGM film Marie Antoinette starring Norma Shearer because I feel that Shearer captured a special sort of majesty and courage in the second act of the film, and it doesn't matter to me that the costumes are very "Hollywood" or that Axel Fersen pops up at the Conciergerie. In that same vein, I did not enjoy The Hidden Diary of Marie Antoinette by Carolly Erickson because I did not see a trace of "Marie Antoinette" in the novel. I feel that the author sacrificed far too much of real history for her own inventions, and lost sight of the queen's life along the way.

I've been feeling much more lenient about historical accuracy in details as time has gone on. I probably won't enjoy many stories if I let myself get caught up in every "but that's inaccurate!" that I manage to catch. I still bristle if Madame Elisabeth is omitted or Marie Antoinette moons over Axel Fersen in the Temple Tower after her husband passes... but in the end, I want to enjoy any story that captures at least some part of the queen's spirit -- regardless of the accuracy of her hairstyle.
Posted by Anna Gibson at 7:19:00 PM