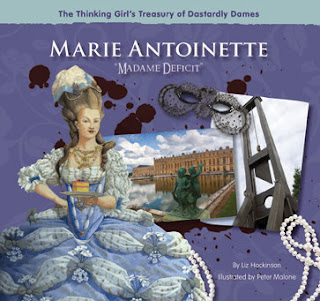 This review is based on a review copy I requested and received earlier this week.


The Thinking Girl's Treasury of Dastardly Dames is a new series of youth books profiling several 'notorious' historical women, presenting the readers with their lives, times, and deeds - in order to allow the reader to decide for themselves: Just how wicked were they?

Marie Antoinette "Madame Deficit" by Liz Hockinson profiles Marie Antoinette, who was and continues to be profiled as the haughty queen who callously stated, "Let the!m eat cake!" when told the French peasants were starving. Although I have read similar "decide for yourself" youth books about other historical figures, this is the first time I've read one about Marie Antoinette.

Marie Antoinette "Madame Deficit" has an interesting layout that utilizes a combination of text, historical images, photography and original artwork. The text is laid out clearly and was very easy to read. I was pleasantly surprised at the number of historical images and photographs in the book, because many of the images aren't typically used in other youth non-fiction books about the queen. It was a refreshing change to see, for example, the painting of Marie Antoinette seated at a harp, entertaining courtiers in her chambers. The original images in the book are quite lovely without glamorizing Marie Antoinette's appearance, which was also a refreshing change.

Liz Hockinson's text flows easily and younger readers should have no trouble following the main thread of the book, or the numerous side stories and tidbits scattered throughout. I wish the book had presented just a bit more of  the positive side of Marie Antoinette, however Hockinson did dispel many of the more common myths, such as the utterance of "Let them eat cake." The author also brought up several key points about a French queen's relation to politics, hostility towards Austrians at the French court, the unfairness of the French tax system and Marie Antoinette's reaction to motherhood--all of which I think young readers will definitely benefit from.

I recommend this book for parents with children who love history - royal history, in particular! - as well as anyone who enjoys a nice layout and a quick read. The book is aimed at ages 9 to 12, and is due to be released in late August or early September.
Posted by Anna Gibson at 8:16:00 PM