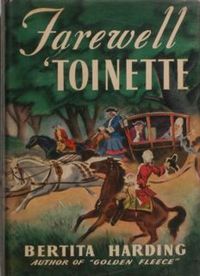 Farewell Toinette by Bertita Harding is about an evental rest stop  by Marie Antoinette and her royal retinue at a castle-turned-hotel on the way to France. The castle, which is disgused as a regular hotel when the duke who owns it hears the Joseph II will never stay at royal lodgings, also becomes host to a band of traveling gypsies, a prince in disguise, and - it's rumored - the ghost of a woman who was buried alive with the bodies of the children she murdered. Joseph II is determined to remain as incognito as possible, Marie Antoinette is fretting over her upcoming marriage, and the duke of the castle juggles all of his guests while worrying about the anniversary of a death which is said to bring bad luck, bad times, and a vengeful spirit.

I stumbled upon this book by accident one day when searching for news articles about the queen, and it really is a quaint little book. The writing is that sort of old, charming storyteller narrative - neither particularly detailed or particularly bland but colorful - and it makes the book perfect for a rainy day or long car ride. The history of the book is rather dubious, especially once you get into mysterious gypsies and haunted spirits, but there's nothing that's terribly offensive or off-putting.

I recommend this book for English collections about Marie Antoinette and her time period, as well as for anyone looking for something a little different and less popular to read.
Posted by Anna Gibson at 3:10:00 PM