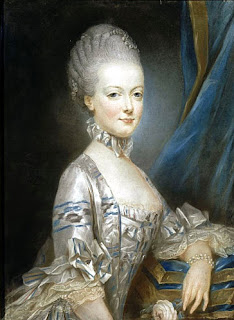 I was finally able to uncover some information about the upcoming novel, Becoming Marie Antoinette, by Juliet Grey. It's been listed on Amazon for some time now, but unfortunately without any information other than the title and the author!

Passages to the Past provides a description:

Marie Antoinette’s brief (though dramatic) life of thirty-eight years was crammed with myriad joys and sorrows both private and public. Much has been written of her years as Queen of France, of her frivolity, her passion for excess, and the financial heedlessness that won her the nickname “Madame Deficit.” But until now, no one has devoted an entire novel to the story of Marie Antoinette’s youth, of her idyllic childhood as Maria Antonia, an archduchess of Austria and the youngest daughter of Empress Maria Theresa, a porcelain-skinned, blonde and blue-eyed boisterous hoyden among a dozen siblings. Author Juliet Grey’s novel is about Marie Antoinette’s often rocky and emotionally arduous journey from girl to woman—from cosseted and indulged child to rambunctious and stubborn teen to supremely self-possessed adult—beginning with the spring day in 1766 when she learns the exciting but terrifying news that she will one day marry the dauphin of France and ending on the terrifying but exciting day in May 1774 when she becomes its queen upon the death of her grandfather-in-law, Louis XV.

Her young life was a long series of hurdles. She sailed over a few of them with grace and equanimity. But some she stumbled over, although she was able to pick herself up and prepare herself to approach the next one. Still other hurdles tripped her up entirely and she metaphorically fell flat on her face. And no sooner did she rise and resume her stride when she was confronted with yet another hurdle. The novel is set first amid the familiar comforts of the Austrian imperial court in Vienna and later at the gilded splendor and manicured gardens of Versailles, a treacherous labyrinth of backbiting, gossip and intrigue, young Antoinette’s myriad interconnected relationships are each fraught with a dramatic tension all their own: that of a formidable and powerful mother and a naïve daughter who needs to take quite a journey (both literal and metaphorical) before she comes into her own; of a pair of devoted young sisters torn apart by political expedience; of a pair of teenage spouses who begin their married lives as complete strangers, neither loving the other, and who must discover how to build an enduring partnership despite their inability to start a family, while their ongoing celibacy is the talk of all Europe; of the tensions between a pretty and bubbly young foreigner in a strange land and her jealous new in-laws; and of the rivalry between the highest ranking lady in France (the vivacious dauphine Antoinette) and the most influential woman in the kingdom, the king’s gorgeous mistress Madame duBarry.

The character of Marie Antoinette presents such delicious contradictions in terms that she is a novelist’s dream. Possessed of a proud temperament, she was nonetheless desperate to please, and in doing so was often too eager to place her trust in the hands of those who were not in fact her confidantes, but who wished her harm instead. She would brook no contradiction, yet was vulnerable to criticism; a frivolous creature who was also the most generous member of the French royal family when it came to helping the poor. She was stubborn and willful, yet playful and adorably charming; regal, yet empathetic; loyal, yet confounded by the dual roles she was often expected to play. She was a natural beauty who according to her own mother was in dire need of painful physical improvements in order to enhance her looks; born to rule, yet shockingly unprepared to do so when the time came to fulfill her ultimate destiny.

I'm always excited for new Marie Antoinette fiction, and this one is set to be a trilogy so it's triple the excitement! This first book is slated to come out August 9th, 2011, with the following books anticipated to be released in 2012 and 2013.
Posted by Anna Gibson at 3:24:00 PM