Book Review: The Ravine: A Family, a Photograph, a Holocaust Massacre Revealed by Wendy Lower 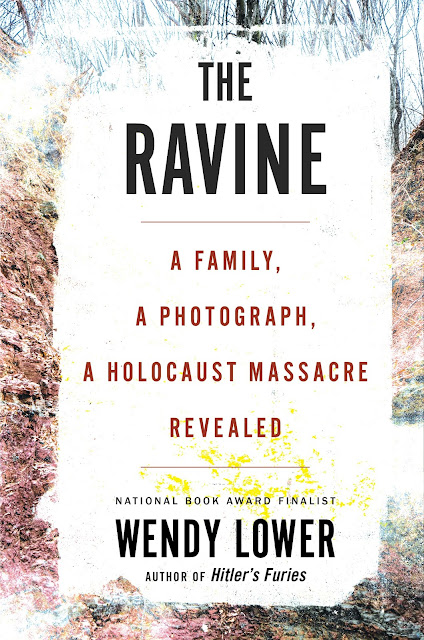 "Atrocity images, especially the rare ones that attest to acts of genocide, the crime of all crimes, offend and shame us. When we turn away from them, we promote ignorance. when we display them in museums without captions and download them from the internet without historical context, we denigrate the victims. And when we stop researching them, we cease to care about historical justice, the threat of genocide, and the murdered missing."

--Wendy Lower, 'The Ravine: A Family, a Photograph, a Holocaust Massacre Revealed'

The Ravine: A Family, a Photograph, a Holocaust Massacre Revealed  is the result of years-long research that took scholar Wendy Lower across numerous countries, into archives, into trail-laden forests and even into the homes of witnesses in the hopes of finding the identities of people in an old photograph.

The photograph in question: A black and white photograph of a woman and child being shot by men in WWII-era German and Ukrainian uniforms. At first glance, the photograph shows a woman falling forward, in the process of dying from a gunshot wound, as her hand grips a barefoot child next to her. After Wendy Lower's research, we know more: there was another child being held in the woman's lap, their only traces to us being the hint of their shins as they fell from the dying woman's embrace.

For almost ten years, Wendy Lower worked to undercover the truth behind the photograph. In an attempt to find some justice for the murdered, her goal was to identify the victims and if possible, identify their murderers. Her work took her to the United States, Slovakia, Isreal, Germany and the Ukraine. She went into archives, into the former forests that had once been killing sites, into the homes of those who witnessed--or whose parents, or grandparents witnessed--the murders of the Jewish people who once lived in Miropol.

The end result of Lower's research is a testament to the importance of researching the stories of Holocaust victims, of not simply consuming their misery and moving on, but striving to give the voiceless murdered back the dignity that was taken from them.

Despite Lower's exhaustive efforts, she was ultimately unable to confirm the identity of the woman or children murdered in the photograph. But her work was not in vain. We know what happened to the Jewish people of Miropol; we know about the rough timeline of the "actions" that took place there, with the assistance and collaboration of local Ukrainians. We know what happened to some of the murderers who participated in the slaughter of innocent men, women and children. We know what happened to some of the witnesses, those who were ordered to dig graves and those who watched--willingly or otherwise--as their neighbors were killed. We know what happened to the photographer, an anti-Nazi activist who worked with his wife in coded letters to ensure that his photographs of the massacres were preserved. We may not know all, but there is some light shone into the darkness of the more than 500,000 Ukrainian-Jewish Holocaust victims whose identities still remain unknown.

Perhaps some readers might find Lower's writing unemotional due to its lack of emotional adjectives, but my opinion on this point can be  expressed with a quote by David Aaronovitch in his review of The Ravine in The Times (UK): "Her writing is spare, with no adjectival intrusion. I welcome it. I don’t need to be told that shooting a woman and children beside a pit is brutal."

Lower focuses her research lens both small and wide, allowing viewers to learn both the micro and macro history related to the photo. Lower blows up details of the photo and analyzes each section concisely (Are there any additional witnesses hidden in the trees? What does the output of light from the sky tell us about the season, the time of day, the camera lens itself? What about the type of clothing being worn by the victims and their murderers?); she also examines the wider context of the photo. What was going on in Miropol before the photo was taken? What do witnesses say happened prior to the marching of the Jewish people of Miropol into the forests, from which only one survivor--a teenage girl, who crawled out of the moving pit of dead and dying people and took refuge nearby--was ever to return?

The Ravine is not an easy read. But it is a necessary one.

The haunting echo of the "missing missing," those lives whose identities and ultimate fate were lost when entire families, entire streets, entire towns were wiped out, continues.