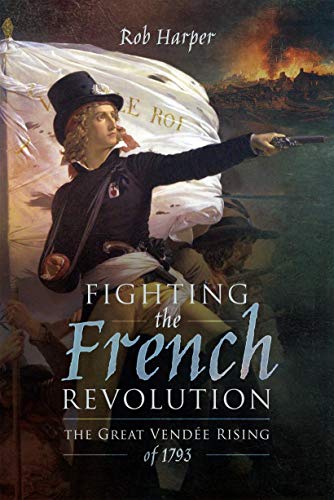 The uprising in the Vendée has been the subject of many books, scholarly works, debates, rhetoric and interpretations over the past 227 years. Much has been written about the social and political causes of the Vendée uprising, and to this day the events in the Vendée can spark lively and even heated debates.

The timeline explored in Fighting the French Revolution is March 1793 through October 1793. The short timeframe allows Harper to provide a solid exploration of the various armies involved in the conflict, Republican and otherwise; along with a chronological look at each military campaign, action and movement. The military movements during this time period are followed closely, sometimes on a day to day basis, depending on the timeline. Throughout the book, Harper provides key information about the core players, troops, along with the most significant factors influencing the outcome during each action.

Harper frequently refers to contemporary letters and reports in discussing the events from March-October 1793, which provides some interesting insight into not only the military maneuvers but the mindset of the people involved in the conflict. In addition to these contemporary quotes, a number of military movements are illustrated with maps and diagrams which provided a clearer picture of troop movements, placements and other pertinent geographical information.

Due to the military micro-focus nature of this book, readers who are looking for a general overview of the Vendée or a book that discusses the social, political, religious and other causes behind the uprising will want to look elsewhere and return to Fighting the French Revolution after reading a more general overview first.

Readers who are interested in learning more about the understudied military history of the Vendée will find the narrow focus of this book an enlightening addition to the study of the Vendée during the revolution and more specifically, the study of the 1793 military response (republican and otherwise) during the uprising. I would recommend Fighting the French Revolution: The Great Vendée Rising of 1793 by Rob Harper as either a standalone read for its military history focus or as a companion book to other studies which explore the wider history of the Vendée uprising.

[A review copy of this book was provided to me by the publisher]
Posted by Anna Gibson at 1:00:00 PM