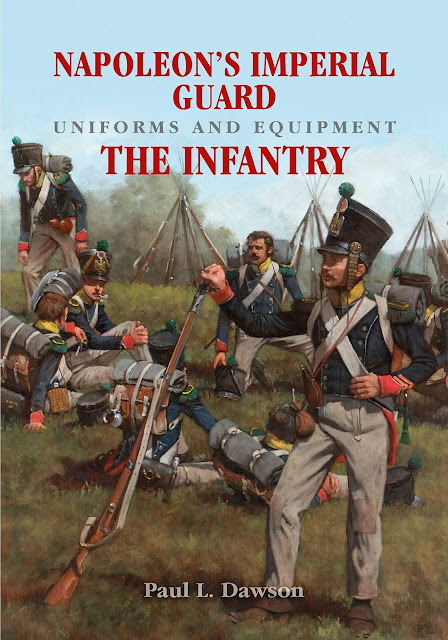 Napoleon's Imperial Guard were a special reserve force that doubled as the personal bodyguards of Napoleon Bonaparte. These were not average soldiers but a special reserve employed only at imperial discretion. In Napoleon's Imperial Guard Uniforms and Equipment: The Infantry, the first volume in a series about the uniforms of the imperial guard, Paul L. Dawson takes readers on an exhaustive and highly detailed look at the weapons, uniforms and other items incorporated into the infantry of the Imperial Guard.

Napoleon's Imperial Guard had both royal and revolutionary origins. From 1789 to 1791 alone, it went through several names and rebranding as political and social tides shifted. Notably, from May 10th, 179 through May 15th, 1791, it went through a series of five different names. In 1799, Napoleon gave the force he name it is recognized by today: the Imperial Guard, formed after the coup of November 1799.

To call Napoleon's Imperial Guard Uniforms and Equipment: The Infantry "exhausive" is something of an understatement. The book contains hundreds of images, including photographs, paintings, sketches; many of the photographs of existing uniforms and uniform pieces have never before been published and are only readily accessible through this book. The text contains important historical information that includes break-downs of each regiment's purpose and history, detailed orders of cloth and buttons for every facet of the infantry; charts listing what uniforms needed to be repaired at certain times, and what those repairs cost; when and where new uniforms were ordered; when and why specific items were ordered and delivered; and so much more.

Dawson's text is informative yet highly accessible even to readers (such as myself) without much experience in reading about military history. The accompanying images, which include both photographs and contemporary images, are produced in full color and are a welcome and necessary visual aid to the wealth of information provided through the text.

I highly recommended Napoleon's Imperial Guard Uniforms and Equipment: The Infantry to anyone with an interest in military uniform history, as well as anyone interested in military history reenactment; I think that the intense amount of detail, both in text and images, provided in this book would be particularly useful to anyone looking to recreate Imperial Guard uniforms.

[A review copy of this book was provided to me by the publisher]
Posted by Anna Gibson at 2:47:00 PM