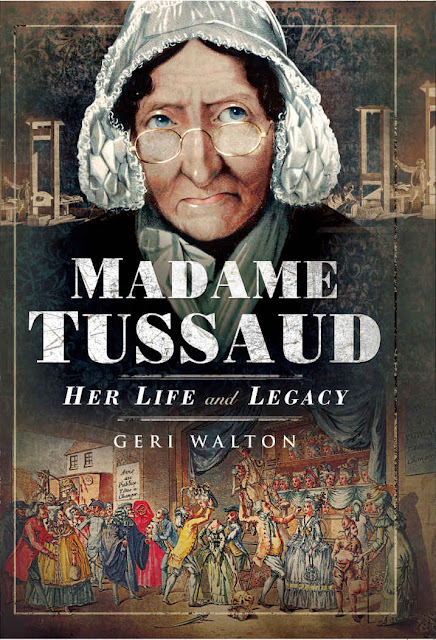 Madame Tussaud's life and legacy are shrouded in mystery and a highly calculated image that Madame Tussaud herself cultivated as she embraced a peculiar type of notoriety after the turn of the 18th century. Was she a tormented artist, forced to make heads of murdered aristocrats and politicians during the French Revolution? Did she hobnob with French Royalty? In Madame Tussaud: Her Life and Legacy, Geri Walton explores the life and legacy of a woman whose morbid and notorious claims to fame have permanently cemented her legacy in the form of waxworks museums still thriving around the world.

Most of the book is about the world around Madame Tussaud rather than the titular subject herself. The beginnings of the French Revolution, the political twists and turns of 1789 to 1792, the Reign of Terror, even the wedding and reign of Queen Victoria--a lengthy series of historical characters, events and vignettes are covered deftly, in a way that provides context for the world that Tussaud inhabited. But due to the scarce information about Tussaud's life, aside from what she presented in her memoirs, the reader is typically left with a stronger impression of these side characters and events in Tussaud's life than of Madame Tussaud.

The most engaging sections in the book are not the ones that focus heavily on historical events and weave Tussaud in and out for a moment to keep the narrative on track, but those that rely on sources outside her memoirs to provide brief yet compelling insights into the woman behind the wax. These moments are heavier towards the end of the book, when the aging Tussaud dealt with potential scammers and others who wanted to take advantage of her. These tidbits, such as a letter written by one of her sons towards the end of her life, are (to me) much more interesting than anything Tussaud might have claimed in her memoirs. Another interesting section that I sorely wished was longer was the chapter on Tussaud's legacy and the reception of her museums both by her peers and contemporary visitors.

Overall, while the book itself did not quite live up to the title thanks to the general mystery surrounding Tussaud's life, I think that Madame Tussaud: Her Life and Legacy could make a good companion read to any series of biographies about 18th century figures.

[A review copy of this book was provided to me by the publisher]
Posted by Anna Gibson at 12:13:00 PM