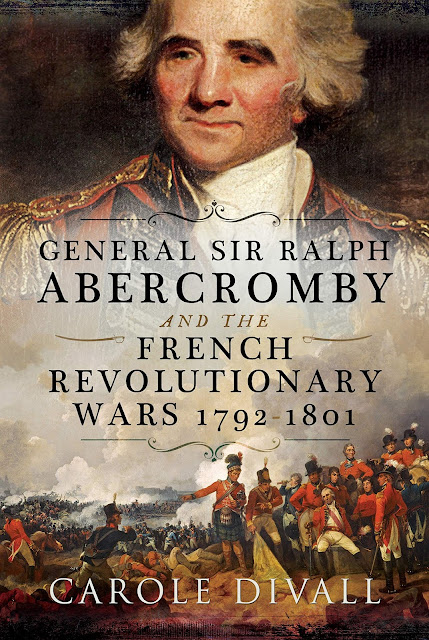 Divall's book is not intended to be a biography, which the introduction confirms, as it explains that Abercromby is a "a focal, and increasingly significant participant player in what is essentially a record of British involvement in the first half of what contemporaries would refer [to] as The Great War." Instead, it is an exploration of campaigns--large, small, European and otherwise--in which Abercromby played an increasingly significant role.

Ambercromby was considered much respected and admired by the men he commanded. Although a later author would deem him the "do-nothing general," the great esteem with which his contemporaries viewed him should be noted. In 1801, the Duke of York--then commander-in-chief of the British army--wrote on Abercromby: "His steady observance of discipline--his ever watchful attention to the health and wants of his troops--the persevering and unconquerable spirit which marked his military career--are worthy of the imitation of all who desire, like him, a life of honor and a death of glory."

As Divall explores the various campaigns in which Abercromby played pivotal roles, it is easy to see where both opinions, divisive as they are, come into play. While the amount of responsibility Abercromby held for certain failures can be debated, even in campaigns where success was limited, Abercromby's great esteem for his troops and his ability to bolster the confidence of his men is very apparent. Throughout his leadership, Abercromby placed a heavy focus on ensuring that his troops were healthy, well-supplied, and moralized. During a tumultous period during a campaign in the West Indies, Divall notes how Abercromby issued a general order which was clearly meant to bolster demoralized soldiers:

"Although the attack of last night was not altogether so successful as might have been expected, the Commander in Chief has the fullest confidence in the troops he has the honour to command, he hopes they will always have in view the superiority of the British arms and they may rest assured whenever they assert themselves with the vigour and courage that distinguishes Englishmen, that they will be successful..."

Divall explores the most significant campaign's of Abercromby's career with a clear narrative and well-chosen quotations from contemporaries as well as orders and personal letters from Abercromby himself. The book also contains a few pages of black and white images, including portraits and maps., which serve as illustrations.

I personally found the chapter on Abercromby's involvement--and ultimate resignation--from a post in Ireland to be the most intriguing, although it primarily involves local politics rather than the external threat of French Revolutionary forces.  Divall quotes Abercromby in a letter from January 1799, whne writing to an Irish friend, "... Long observation has convinced me, that all your misfortunes, that all the evils with which you are threatened, proceed from the illiberal, the injust, and the unwise conduct of England. Your legislature and your Executive Government partake of course, of the vices flowing from the wretched system of English domination."

With this letter in mind, it is no wonder Divall notes deftly that the critical question regarding the "failure" of Ireland was not what Abercromby should or should not have done, but rather why the government sent him to Ireland, knowing his sentiments, in the first place.

Abercromby was not always successful. But his dedication to his troops and his willingness to serve in military commands even at an age and point in his career when a quiet post would have been accepted, is something that his contemporaries admired. Divall also demonstrates how Abercromby made an exceptional name for himself--for better or worse, depending on how you view the strategical consequences of such actions--with his willingness to fight in the midst of his troops rather than protected positions. Ultimately, Abercromby was fatally wounded during the Battle of Alexandria in 1801.

Despite the negative moniker given to him by later historians, and the fact that the French Revolutionary wars as a whole have often been eclipsed by studies of the Napoleonic wars that followed, there can be no doubt that Abercromby was much beloved and respected by his contemporaries. After writing on the events of his death, Divall skillfully weaves many of the letters and other statements made by those that knew him. In addition to prose that praise his military career, his dedication to his troops, and his selflessness, there is a tragic and mournful note in a letter written by Henry Dundas, lamenting the loss of an imagined shared future:

"I flattered myself that after closing our political and military service, we might for some years have lived in happy society together, surrounded by our families, anticipating the happiness and growing prosperity of those who were to come after us. These dreams must now pass away, but you cannot be surprised if I find it difficult at once to banish the delusion."

[A review copy of this book was provided to me by the publisher]
Posted by Anna Gibson at 11:46:00 AM