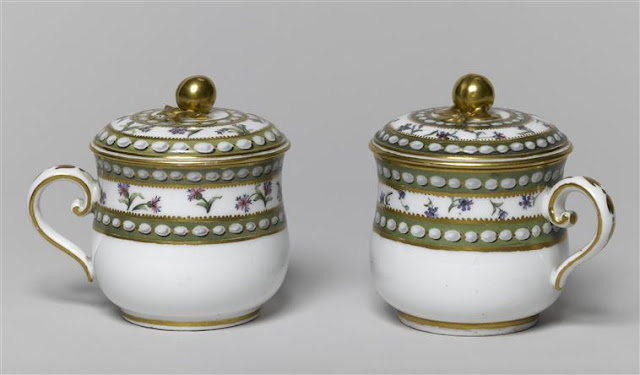 These small pots are part of the most recognizable and popular of all the Marie Antoinette Sèvres services: the perles et barbeaux ("pearls and cornflowers") service, which was commissioned from Sèvres in 1781 and exhibited at Versailles on January 2nd, 1782. The art design is believed to have been done by Michel-Gabriel Commelin and according to RMN, these particular pieces were painted by Jean-Pierre Fumez.

While the exact destination of the original service is unknown, it is generally believed that the service was used for the Petit Trianon due to the simplistic design which matches the aesthetic Marie Antoinette cultivated at her private estate.

Unlike a few other Sèvres designs created for Marie Antoinette which were sometimes repeated for other members of the royal family, the official Sèvres factory perles et barbeaux service was reserved exclusively for Marie Antoinette. However, its design was such an immense success that it was copied by other factories throughout Europe.

The full service consisted of 295 pieces, including 96 plates worth 30 livres each. As of today, the service is scattered around the world in both museums and private collections. These particular pots are in the collection of the Chateau de Versailles.