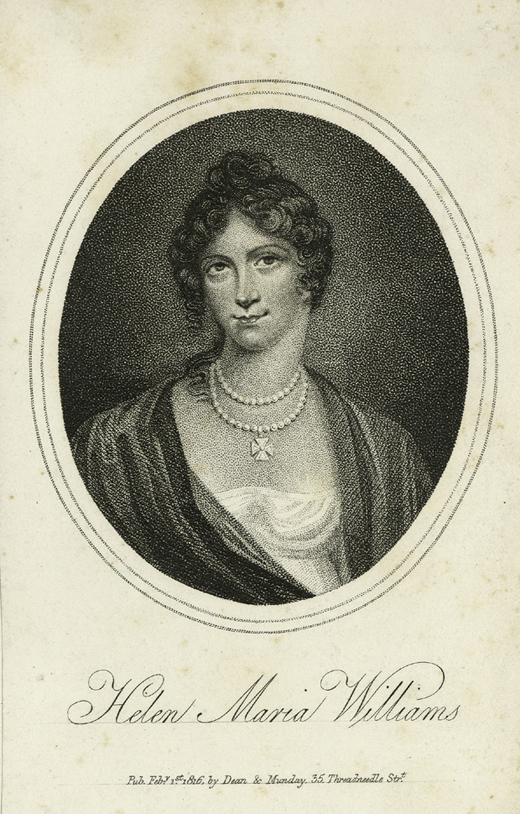 Helen Maria Williams (1759-1827) was a British author and translator whose first works, published under the simple title 'Poems' in 1786, reflected her support of ideals such as the abolition of slavery and world peace. In 1789, Williams embraced the ideals of the French Revolution and began frequently staying in France, returning only to London briefly in 1791 before going back to Paris. In addition to regularly translating French works for English-speaking readers, during the revolution she hosted prominent salons frequented by the likes of Thomas Paine and Mary Wollstoneecraft.

During the Reign of Terror, she and her family were imprisoned; during this period, she continued to work on her English translations, including a translation of Paul et Virginie by Bernandin St. Pierre. In a later edition of this translation, Williams noted, "... I gave myself the task of employing a few hours every day in translating the charming little novel ... and I found the most soothing relief in wandering from my own gloomy reflections to those enchanted scenes[.]" Williams also wrote her 'prison sonnets' during this period, although as she notes in her later edition, some of them were lost when her papers were sent to French officials be examined before she was allowed to send them.

Sonnet to the Strawberry was one of these 'prison sonnets,' which she included interspersed with her translation of the novel. After her release from prison, Williams continued writing; her extensive Letters on France and later essays on French politics and society would dub one critic to remark that "because Miss Williams has written well and successfully upon that subject, none but a lady could write on the French Revolution."

Sonnet to the Strawberry
[as transcribed by Eighteenth-Century Poetry Archive]

THE Strawberry blooms upon its lowly bed,
Plant of my native soil! — the Lime may fling
More potent fragrance on the zephyr's wing,
The milky Cocoa richer juices shed,
The white Guava lovelier blossoms spread —
But not, like thee, to fond remembrance bring
The vanished hours of life's enchanting spring;
Short calendar of joys for ever fled!
Thou bid'st the scenes of childhood rise to view,
The wild wood-path which fancy loves to trace;
Where, veil'd in leaves, thy fruit of rosy hue
Lurk'd on its pliant stem with modest grace.
But ah! when thought would later years renew,
Alas, successive sorrows crowd the space!
Posted by Anna Gibson at 9:56:00 PM