Portrait Wednesday: A portrait of Magdaleine Pinceloup de la Grange with a cat 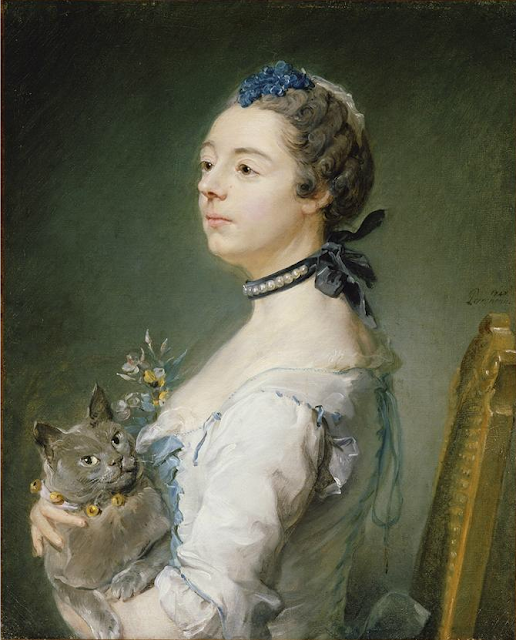 This portrait by Jean-Baptiste Perronneau depicts Magdaleine Pinceloup de la Grange, née de Parseval, whose husband also had his portrait done by the same artist. In this portrait, Magdaleine is wearing a refined dress that is complimented by a wealth of smaller details indicating the fine station of the sitter; most notably, a string of large, luminous pearls wrapped around her neck over a decorative blue ribbon.

The cat in her lap--identified by the Getty Museum as a chartreux, a classic French breed--is no less adorned with a collar bedecked with bells that echo the pearls around their owner's neck. Were the bells a clever nod to the pearls around Magdaleine's neck, a symbolic gesture to the ornamental nature of portraiture for both humans and animals? Or did Magdaleine simply tire of her beloved chartreux pouncing on the skirt of her gown unexpectedly and insist he wear the bell collar to spoil his fun?

For anyone hoping for an inside view, this portrait is on display at the Getty Center, Gallery S202.
Posted by Anna Gibson at 2:38:00 PM